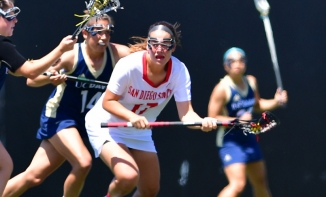 With the loss, Aztecs opened their three-game road swing on a sour note, slipping to 8-7 overall, while the Women of Troy move to 8-6 on the year as well.

Aztec fortunes were also buoyed by Taylor Sullivan, who collected three ground balls, while Bailey Brown won four draws of her own to go with one ground ball.

The contest was a defensive struggle for the first nine minutes and change, as Steele converted a free-position attempt with 20:55 remaining in the first half to tie the score at 1-1.

However, USC responded with a 4-0 spurt over a span of 8:49 to take the lead for good. Alexis Kardias capped the run with a strike at the 10:31 mark to give the host school a 5-1 cushion.

SDSU twice managed to whittle the deficit down to two goals in the second half, including a 7-5 spread following McGinty’s successful eight-meter shot with two minutes elapsed.

That would be as close as the Aztecs would get, however, as the Women of Troy answered with another 3-0 surge over stretch of four minutes, building a 10-5 bulge by the 21:46 mark following a free-position goal by Izzy McMahon.

SDSU ended its scoring drought of nearly 10 minutes on Tan’s eight-meter attempt moments later, before USC closed with a 7-1 run over the final 16:49 to seal the Scarlet and Black’s fate.

McMahon led all players with four goals on the afternoon and added one assist, while Hope Anhut finished with three markers of her own in the victory.  In addition, Jackie Gilbert contributed a game-high 11 draw controls, while Lydia Sutton recorded five ground balls and four caused turnovers.

Collectively, the Women of Troy outshot the Aztecs 44-26, maintaining a 28-18 advantage in shots on goal. In addition, USC owned the statistical edge in ground balls (24-15) and draw controls (14-11) while committing four fewer turnovers (12-16).

SDSU goalkeeper Katy Sharretts made 11 saves before giving way to Amanda Stapp late in the second half, while counterpart Gussie Johns came up with 11 stops as well.