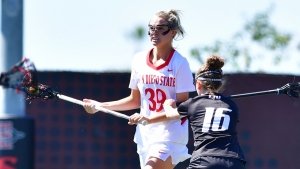 With the loss, the Aztecs dropped their fifth in a row—all on the road—falling to 8-6 overall and 0-1 in conference play, while UC Davis (9-7, 2-0 MPSF) clinched the No. 1 seed in the MPSF Championships, slated for April 26 & 28 on the Aggies’ home field.

SDSU also received a pair of goals from Morgan Taylor and Kirstie Greenlaw, while Julia Sheehan dished out two assists. Despite the setback, the Aztec cause was also buoyed by goalkeeper Katy Sharretts, who broke her own school record with 18 saves, while Elizabeth Adams collected a career-high four ground balls.

SDSU fought back from deficits of 4-1 and 7-5 to tie the score on two occasions in the first half. However, the Aggies never allowed the visitors to gain the upper hand, utilizing a 5-0 run during a 10-minute stretch in the second period to keep the Aztecs at bay.

Trailing 7-5 late in the first half, SDSU knotted things up by the 2:40 mark on unassisted goals by Steele and Greenlaw just 50 seconds apart.  However, the Aggies went ahead to stay on the subsequent possession after Maddie Myers hit pay dirt with 2:01 remaining.

After the break, UCD extended its lead to 10-7 in the first 2:13 when Shannon Cross and Taylor Cuenin each found the back of the net. The Aztecs responded with a pair of tallies by Tan and Grace McGinty but could draw no closer.

SDSU won the ensuing draw and had a chance to tie the game after an exchange of turnovers. However, Aggie goalkeeper Taylor Mathieson made a save on another McGinty shot with 21:09 left to extinguish the threat.

The complexion of the game gradually eroded for the Aztecs, as Cuenin scored four of her game-high six goals over the next 10 minutes, while Mar Alvear added a marker of her own to provide the Aggies a 15-9 cushion by the 10:08 mark and all but squelch SDSU’s comeback hopes.

The Aztecs finally broke their near 17-minute scoring drought on a goal by Greenlaw with 7:50 remaining. SDSU eventually narrowed the gap to 15-12 on strikes by Steele and Tan, but by that time only 1:52 showed on the clock. Cross then tacked on a goal for the hosts with just seven ticks left to account for the final score.

In addition to her goal production, Cuenin led all players with six ground balls, while Alvear totaled nine draw controls to go with three ground balls of her own. Amanda Outcalt also got into the act with six points on four goals and two assists, while Mathieson finished with seven saves on the afternoon before giving way to Grace Richards with just under four minutes to go.

San Diego State wraps up its six-game road swing on Wednesday, April 17 when it travels to the desert to face Arizona State in a non-conference game, starting at 3 p.m. MST/1 p.m. PDT.