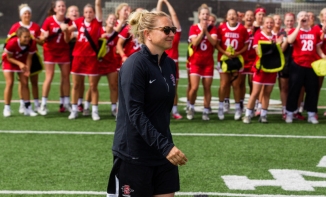 “I want to thank (athletic director) John David Wicker and San Diego State for their continued support of myself and the lacrosse program, “White said.  “I am extremely happy to be an Aztec and I am committed to leading this program’s continued growth. I firmly believe in what have built here and the direction this program is headed. I have an amazing staff that works very hard and dedicated players who give me all they have every day.  It has been an amazing ride so far and I am confident the best is yet to come.”

The only coach since the lacrosse became the 19th collegiate sport at SDSU in 2012, White completed her seventh season at the helm of the Aztec program this past spring, leading the Scarlet and Black to its first-ever conference title with a thrilling 11-10 victory over UC Davis in the finals of the MPSF Championships.

Under White’s guidance, the Aztecs established a program standard with 11 wins during their historic 2018 campaign, finishing with double-digit victories in consecutive seasons for the first time in school history. Individually, SDSU also set a program record with seven student-athletes named to the all-MPSF team, including juniors Harlowe Steele (38) and Jill Haight (37), who gave the Aztecs two scorers with 35 goals or more in the same year for the first time ever. In addition, SDSU collected a league-high 15 MPSF Player of the Week awards during the regular season and had seven individuals merit MPSF all-academic honors for their outstanding work in the classroom.  As a team, the Aztecs were among the nation’s best in the circle, averaging a conference-high 15.26 draw controls per game, which ranked 14th in the country.

Under White direction, SDSU completed another memorable slate with a 10-8 record in 2017, culminating in its first-ever postseason triumph with a conquest of Oregon in the quarterfinals of the MPSF Championships. The Aztecs displayed their tenacity on defense throughout the year, ranking 15th nationally with nearly 11 caused turnovers per game.

In November 2016, White was inducted into the London (Ontario) Sports Hall of Fame after becoming the only women’s lacrosse player to represent Canada in each of the last three decades. In 1995, she competed on the inaugural U-19 Canadian National Team and later served as an assistant for the squad in 2007. White also played for Team Canada at four IFWLA World Cups (2001, 2005, 2009, 2013), helping the 2013 team to a silver medal.

A four-year letterwinner during her collegiate playing career at Ohio State, White was a four-time Buckeye scholar-athlete selection and an academic all-Big Ten honoree on three occasions. She co-captained the 2002 squad to an 11-5 record and a runner-up finish in the American Lacrosse Conference, helping Ohio State claim its first NCAA berth.