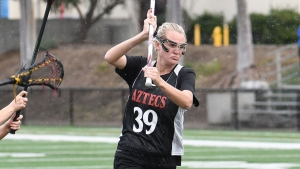 As a team, SDSU enjoyed the statistical advantages in most categories, including shots (44-24), shots on goal (32-18), ground balls (27-24) and draw controls (13-12). The Aztecs also had their transition game clicking with a perfect 22-for-22 effort on clears and converted 6 of 14 free position shots, while the Lions went 0-for-4 on their chances.

The two sides were deadlocked at 3-3 in a low-scoring affair through the first 20 minutes of the contest before Jones struck for her second free-position goal of the day to put SDSU in front for good.

Jones’ strike ignited a pivotal 8-1 run through the first seven minutes of the second half, as the Aztecs gave themselves some much-needed breathing room. San Diego State shared the wealth during that span, with eight different players contributing goals, including Greenlaw and Sullivan, who provided the first two scores after intermission to give the Scarlet and Black an 11-4 advantage.

Columbia (2-2) narrowed the gap to 11-6 after consecutive goals by Emily Manville and Regan Steed near the 20-minute mark of the second period; however, the Aztecs made sure their adversaries drew no closer, fashioning a 5-1 blitz over the final 15:15 to put the victory on ice. SDSU once again spread the ball around during that stretch, as five different players found the back of the net, including Arielle Shahrabani, who notched her first collegiate goal with 1:46 remaining to complete the scoring.

In addition to their goal production, Brown and Steele (4gb) posted a team-high four draw controls each, while Morgan Taylor (1g, 1a) and Jenny Buckland collected three ground balls apiece.

Not to be outdone, goalkeeper Katy Sharretts made 11 stops in front of the net, finishing with double-digit saves for the third straight game and 12th time in her career.

San Diego State will have over a week off from competition before opening a five-game homestand starting on Tuesday, March 5 when Central Michigan invades Aztec Lacrosse Field.  Opening draw is scheduled for 3 p.m.