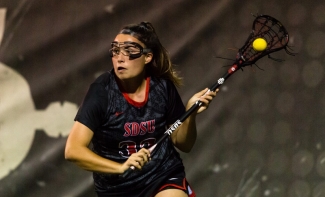 April 15, 2018 (Fresno) - San Diego State lacrosse’s Elizabeth Rourke, Harlowe Steele and Kirstie Greenlaw combined for 10 goals on Sunday to lift the Aztecs to a 15-11 triumph over Fresno State in a key Mountain Pacific Sports Federation game at the Bulldogs’ Soccer and Lacrosse Field.

With the victory, SDSU snapped a season-long four-game losing streak, moving to 9-7 on the year and 1-1 in conference play, while Fresno State slips to an identical 9-7 mark overall and 0-1 in the MPSF.

Rourke notched a career-high six points on four goals and two assists to go with four ground balls, while Steele and Greenlaw netted four points each on three goals and one assist, helping the Aztecs improve to 6-1 all-time against the Bulldogs.

As a result, SDSU has now won at least nine games in back-to-back seasons for the first time in the program’s seven-year history.

The Aztec cause was also aided by Morgan Taylor, who set a career-high with five caused turnovers, which is tied for second on the school’s single-game charts, while matching her personal-best with four ground balls. In addition, Bailey Brown continued her amazing freshman season with two goals and four draw controls, while goalkeeper Katy Sharretts posted her fifth game of the year with 14 saves to tie a career-best.

Not to be outdone, Grace McGinty got into the act with a game-high six draw controls to match a personal-best as well.

Two teams were evenly matched for the most part, with SDSU outshooting Fresno State 36-34 for the game and maintaining a 29-25 spread in shots on goal, while the Bulldogs held a slight 32-30 edge in ground balls.

However, the Aztecs won more draws (16-11) and converted 6-of-12 free-position attempts, compared to Fresno State’s 4-for-7 clip.

SDSU struck quickly, scoring goals on its first three shots of the game, as Jill Haight, Rourke and Steele each found the back of the net in the opening 2:05 of the game. Nicole Ortlieb finally got the host school on the board with a strike at the 26:32 mark, before the Aztecs responded with a 6-1 blitz over the next 15:31 to build a commanding 9-2 advantage.

Rourke and Steele sparked the run with two goals apiece, while Brown and Taylor Sullivan added single markers each to give the Scarlet and Black a seemingly safe lead.

The Bulldogs responded with goals from Hannah Krats and Kayla Galet just over four minutes apart to narrow the gap; however, Greenlaw hit pay dirt just before the horn sounded to provide the contest its 10-4 count at intermission.

Remarkably, Fresno State made a game of it in the second half, methodically chipping away at the deficit with a 7-1 surge over a 17-minute span to tie the score at 11-11. Galet and Tiffiny Wallace keyed the run with two goals apiece, while Ortlieb, Sarah Bloise and Marina Mayo recorded single tallies each to help bring the Bulldogs back from the proverbial dead.

Unfazed, the Aztecs stood their ground, outscoring Fresno State 4-0 over the final 11:21 to pull away for the win. Rourke, Isabelle Flud and Greenlaw all capitalized on successive free-position shots, while Brown closed out the scoring with 47 seconds remaining off a feed from Steele.

Galet paced the Bulldogs with three goals, while Lindsay Hobson led all players with five ground balls. In addition, Mackenzie Wallevand contributed five draw controls, while Abigail Bergevin caused four turnovers in the loss. Elsewhere, goalkeeper Natalie Chaffin made 10 saves in relief of Laurel Maunder, who was chased with 11:32 left in the first half after Steele’s second goal of the afternoon.

San Diego State wraps up its regular-season slate on Saturday, April 21 when it takes on No. 21 Notre Dame in a non-conference clash at South Bend, Ind. Game time is set for 10 a.m. PT.

Meanwhile, Fresno State travels to UC Davis in game to decide final seeding for the MPSF Championships, scheduled for April 27 and 29 at Aztec Lacrosse Field in San Diego.

SDSU is assured of the No. 2 seed if the Aggies win or if the Bulldogs win by four goals or less. The Aztecs would be the No. 3 seed if Fresno State wins by five goals or more.