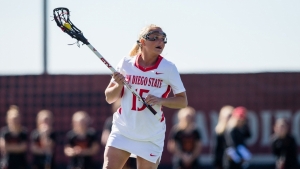 Aztecs improve to program-best 8-1 on the year

It wasn’t easy, however, as the Aztecs didn’t take the lead for good until the 13:16 mark of the first half on Julia Sheehan’s unassisted goal.

Despite a 39-21 deficiency in shots on goal, the Blackbirds (1-7) managed to stay close for the most part thanks to the efforts of goalkeeper Sam Kidd, who posted a whopping 21 saves to go with seven ground balls and three caused turnovers.

In addition, LIU converted 6-of-8 free position shots, compared to SDSU’s 2-for-8 clip.

Trailing 5-4 after Isabelle Peng’s tally with 14:25 remaining in the first half, the Aztecs scored six straight goals over a six-minute span to vault in front for good.  Arielle Shahrabani sparked the run with an eight-meter conversion, followed shortly thereafter by Sheehan’s aforementioned goal. Harlowe Steele also had two markers during that stretch, while Paige Hudak and Madison Nunziata added single goals to give the host school a 10-5.

The Blackbirds responded with two scores by Elise Person and Rachel Masullo just over three-and-a-half minutes apart to pull the visitors to within three, but Marissa MacRae capitalized on a leaky LIU defense shortly thereafter, sprinting in from the right sideline to beat Kidd with a cannon shot, which gave the contest its 11-7 score at intermission.

Taylor Sullivan’s strike with just 1:22 elapsed in the second half restored SDSU’s five-goal cushion at 12-7. However, the two teams alternated scores on the next five tallies, as LIU trimmed the margin to 14-10 with 22:23 left on Bianca Santucci’s tally after a quick pass from Person.

The score remained unchanged for the next nine minutes before the Aztecs netted a flurry of three goals by Steele, Kirstie Greenlaw and Caitlin Jones to build a 17-10 advantage by the 10:30 mark.

The Blackbirds made things respectable with a 5-1 run over the final 8:35 as Amanda Masullo hit pay dirt three times, including two on free position shots, while Person added two other goals. SDSU’s final tally of the afternoon was registered by Shahrabani with just under six minutes to go.

The Aztecs had 10 different players find the back of the net on Saturday, including hat tricks by Jones, Steele and Sullivan, who also posted a game-high seven draw controls and caused a team-best three turnovers. Also aiding the SDSU cause were Greenlaw, Gabbie Garrison and Bailey Brown (1g, 3 dc), who picked up three ground balls apiece.

The Aztecs rotated all four of their goalkeepers, with Sam Horan collecting her first victory as a collegian after entering for the final 14:50 of the first half.

Amanda Masullo paced the Blackbirds with a game-high five points on four goals and one assist, while Santucci and Person finished with four points each on three tallies and one helper.

“We expected LIU to fight with their top four players, and they came to play,” said Aztec head coach Kylee White. “They did what we expected. They fought and went hard at the goal.

“We’ll have to refocus this week in practice. We’ll have to watch some film and correct some of the mistakes we’re consistently making right now before we head out on the road. We as coaches have a big job preparing them for next week physically and mentally.”

San Diego State opens a six-game road trip next weekend when it travels to the Buckeye State to battle Cincinnati on Friday, March 22, before locking horns with Ohio State on Sunday, March 24.