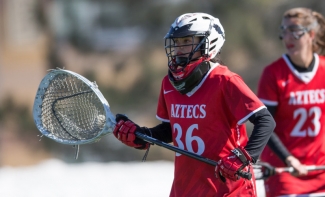 With her award, Steele collected her third conference weekly certificate of the season (Feb. 12 and Feb. 19) and fourth of her career, while Sharretts merited her second award in a Scarlet and Black uniform (Feb. 26). Consequently, the Aztecs have now received MPSF weekly recognition on 13 occasions already this year.

A native of Coquitlam, British Columbia, Canada, Steele netted a hat trick in SDSU’s narrow 11-10 home victory over Liberty on March 23, as all three of her shots were directed on goal. Her third tally of the evening was the result of a successful free-position shot at the 11:40 mark of the second half that gave the Aztecs an 8-5 lead. In addition, the SDSU junior matched her personal best with a game-high five draw controls while posting two ground balls and one caused turnover.

For the season, Steele is tied for second on the team with 21 goals and ranks third with 29 draw controls and 15 ground balls to go with six caused turnovers.

Sharretts, meanwhile, came huge against Liberty last Friday, matching her personal-best and 2018 MPSF season-high with 14 saves. The Aztec redshirt sophomore faced 35 shots for a .583 save percentage, which is .123 percentage points higher than her total for the year. In addition, Sharretts’ 14 stops is tied for fourth on SDSU’s single-game charts. She also equaled her career high with three ground balls and set another personal standard with two caused turnovers.

A product of Bel Air, Md., Sharretts has amassed a league-leading 98 saves overall, which ranks seventh in the country as of March 26. She also occupies the 37th spot nationally with 8.91 saves per game, while her .460 save percentage ranks 40th.

San Diego State (8-3), which has equaled its best 11-game start in program history, is back in action on Tuesday, March 27 when it battles Delaware in a non-conference road game beginning at 1:00 p.m.