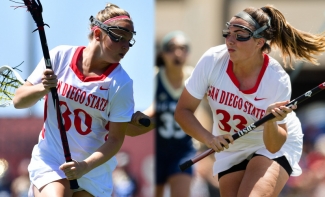 With their awards, the Aztecs have received 15 weekly conference honors this season and have had multiple winners on five different occasions.

A native of Long Beach, N.Y., Rourke collected her first career MPSF weekly certificate after setting career highs with six points and four goals at Fresno State on April 15, lifting SDSU to a crucial 15-11 victory. Three of her goals came in the first 8:18 of the contest, helping the Scarlet and Black build a 10-4 lead by halftime.  The senior attacker also dished out two assists and scooped up four ground balls vs. the Bulldogs, as the Aztecs pulled away for the win. She also finished with one goal and one ground ball in SDSU’s loss at No. 20 USC on April 13.

In addition, Rourke has collected two or more ground balls in seven of the last eight games and has dished out multiple assists five times this year, including three in a home victory over Arizona State on Feb. 17.

Brown leads all Aztec freshmen with 11 goals, 14 ground balls and 43 draw controls, which rank third on the team. She has won four or more draws in six different games for SDSU this year, including a season-high seven in an 18-16 triumph at home over Niagara on March 6.

San Diego State wraps up its regular-season slate on Saturday, April 21 when it takes on No. 21 Notre Dame in a non-conference game in South Bend, Ind. Opening draw is scheduled for 10 a.m. PT. The Aztecs will then host the MPSF Championships, set for April 27 and 29.