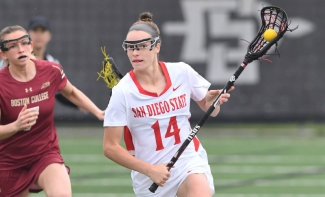 With the loss, SDSU drops its second straight one-goal decision, slipping to 8-5 on the year, while the Mountaineers move to 5-4 overall.

The contest was a tale of two halves as the teams combined for 19 goals in the first period before evolving into a defensive struggle with just six markers tallied overall in the final 30 minutes thanks in part to deteriorating weather conditions.

Individually, the Aztecs were led by Jill Haight's hat trick, while Harlowe Steele and Morgan Taylor notched two goals apiece. Haight and Steele were exceptional in the circle Friday, winning seven draws apiece as the Scarlet and Black maintained a sizable 22-5 advantage in that statistic.

SDSU also received a pair of assists from Elizabeth Rourke, while Steele and Mackenzie tied for game-high honors with three caused turnovers each.

The Aztecs built a pair of three-goal leads in the first half, including a 5-2 spread with 19:55 remaining after Taylor found the back of the cage off a pass from Rourke.

However, Mount St. Mary's responded with a 7-2 spurt over the next 16 minutes and change as Carly Miller and Emily Davis scored two goals apiece to key the run, putting hosts up 9-7 by the 3:38 mark. SDSU countered with tallies by Haight and Bailey Brown in the final 2:38 before intermission, sandwiched around a Mountaineer goal by Zoe Hurlburt, to give the contest its 10-9 score at halftime.

The Aztecs knotted things up at 10-10 on Taylor Sullivan's marker with six minutes elapsed in the second half, before Mount Saint Mary's notched three straight goals to take the lead for good. Kate Kinsella recorded her second strike during that span with just 2:05 left on a power-play opportunity, giving the Mountaineers a seemingly safe 13-10 advantage.

However, the Aztecs' flashed their resiliency, scoring two quick goals by Steele and Taylor just 26 seconds apart, trimming the deficit to 13-12. After winning the ensuing draw, SDSU had two chances to tie the game in the final 45 seconds, but goalkeeper Jillian Petito saved the day for Mountaineers, denying free position shots by Steele and Haight, including the latter with just two seconds on the clock.

Petito totaled 14 saves and seven ground balls on the afternoon, while her Aztec counterpart Katy Sharretts finished with nine stops and two ground balls of her own.

SDSU outshot Mount Saint Mary's 37-28, including a 26-22 margin on goal, but the Scarlet and Black was just 1-for-11 on free position attempts, while the Mountaineers were 1-for-6. In addition, the Aztecs lost the turnover battle 20-17 and experienced a 23-20 deficiency in ground balls for the game.