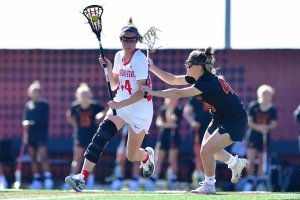 March 8, 2019 (San Diego) - Harlowe Steele scored the golden goal with 32 seconds elapsed in the second overtime to give San Diego State a wild 15-14 victory over Vanderbilt on Friday at Aztec Lacrosse Field.

In addition, Kirstie Greenlaw, Caitlin Jones and Morgan Taylor each netted a hat trick to help the Aztecs (5-1) win their third straight and deal the Commodores (5-1) their first loss of the year.

Steele’s versatility was displayed prominently, as the SDSU midfielder compiled five points on two goals and a career-high tthree assists to go with a personal-best nine draw controls, which ranks second on the program’s single-game charts.

Greenlaw also finished with five points after dishing out two helpers of her own, while Taylor and goalkeeper Katy Sharretts picked up three ground balls apiece.

Despite trailing in most statistical categories, including shots (40-31), shots on goal (26-22), ground balls (21-18) and draw controls (17-16), the Aztecs persevered thanks in part to another solid performance in front of the net from Sharretts, who totaled 12 saves, marking the 13th time in her career that she has finished with double-digit stops.

The contest featured six ties and three lead changes, as neither side led by more than three goals.

With the score knotted at 2-2 in the first half, the Aztecs seemed poised to take control with three consecutive strikes over a three-minute span, including two by Greenlaw sandwiched around Bailey Brown’s tally, giving the Scarlet and Black a 5-2 lead at the 22:11 mark.

However, Hadley Brown’s two goals served as bookends to a 4-0 Vanderbilt run, which included markers by Gwyn Devin and Sophie Furlong, helping the visitors stake a 6-5 lead with 16:19 to go in the period.

The game turned into a defensive battle over the remainder of the half, with the two teams trading single goals—one by SDSU’s Jones and the other by Julie Blaze, which provided the Commodores a slim 7-6 advantage at intermission.

Vandy tried to give itself some breathing room after the break, building a two-goal lead on four occasions, including an 11-9 spread with just under 15 minutes remaining.

However, the Commodores were unable to put the host school in their rearview mirror, as the Aztecs stormed back with two goals apiece from Taylor and Julia Sheehan over nearly the next six minutes to reclaim a 13-11 advantage by the 9:04 mark.

It was Vanderbilt’s turn to rally at this juncture, with Maddie Souza and Devin each finding the back of the net just over two minutes apart to tie the score at 13-13 with 5:20 left in regulation.

Just over two minutes later, Taylor hit pay dirt to put the Scarlet and Black in front 14-13 with 3:11 to go, but Gabrielle Fornia got the equalizer for the Commodores just 31 seconds later.

Vandy goalkeeper Lily Argyle, who relieved starter Madison Foglio in the first half, came up huge with a save on Sullivan’s free position attempt with 1:36 left; however, the Commodores were unable to get a shot off on their final possession of regulation.

The Commodores took three shots in the first overtime, misfiring on their two initial attempts, before Sharretts thwarted Blaze’s try with 28 ticks on the clock.

In the second extra session, Vandy’s Alex Rasmussen was whistled for a foul moments after Steele won the opening draw, and the Aztec tri-captain capitalized, rifling the subsequent free position shot into the net as the SDSU bench erupted in jubilation.

Fornia and Brown finished with three goals each to pace the Commodores, while Blaze (2g) and Brianne Gross totaled four draws apiece in the loss.

“I was very proud of the way we were able to execute our game plan tonight,” said Aztec head coach Kylee White. “During timeouts, we were able to draw up some plays and talked about mark-ups defensively. We also talked about having a warrior spirit before the game and I thought our players maintained that throughout. They were focused, determined and had that team-first mentality. It was fun to win in that fashion, just gutting it out.

“I think we finally figured out how to compete for a full game. Even though they came back a few times, there was never a lull in our energy, and I didn’t have that sense of frustration as I had in other games.”

San Diego State continues its busy stretch on Sunday, March 10 when it squares off against Lehigh at Aztec Lacrosse Field. Opening draw is set for noon PT and the first 250 fans will receive a free pair of Aztec sandals.