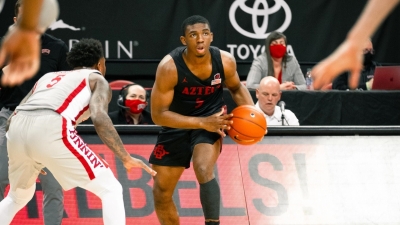 Nathan Mensah scored 14 points for the Aztecs (20-4, 14-3 MWC), who used a 14-0 run spanning halftime to take control and win their 11th straight game. They get a week of rest before returning to Las Vegas as the No. 1 seed in the conference tournament.

With its NCAA Net Ranking at a season-high No. 17, SDSU appears to have done enough to get an at-large berth in the NCAA Tournament if it doesn't win the conference tourney and secure the MWC's automatic bid.
The Aztecs controlled their own destiny during the last week after the MWC awarded them a pair of forfeit victories over New Mexico for a series that wasn't played because the Lobos had injuries but no COVID-19 cases. Those forfeit victories don't count in SDSU's overall or formal conference record, but will count for seeding and conference championship implications. SDSU swept two home games against Boise State during the weekend.
David Jenkins Jr. scored 32 points for UNLV (11-13, 8-9), while leading scorer Bryce Hamilton was held to nine points, nine under his average, and fouled out with 1:41 to go.
SDSU opened a 16-point lead in the second half before UNLV cut it to eight points. The Aztecs responded with a 9-0 burst for a 62-45 lead, with Mensah getting a slam dunk and making four free throws and Schakel hitting a 3. Schakel finished with a career-high nine rebounds, just missing his first career double-double.
SDSU scored the final seven points of the first half as part of a 14-5 run and led at halftime for the 12th straight game, 35-28.
The Aztecs continued the run by scoring the first seven points of the second half to run the lead to 42-28. Schakel hit a 3-pointer, Mensah scored inside and Mitchell had a nice spin move for a layup, drew a foul and made the three throw.
Trailing 23-21, the Aztecs got five points in five seconds. Schakel hit a 3-pointer and Mitchell stole the inbound pass and dunked for a 26-23 lead.
UNLV tied it at 28 when Moses Wood hit a 3-pointer and Hamilton made a baseline jumper. SDSU then closed the half on a 3-pointer and two free throws by Schakel and two free throws by Adam Seiko.
UNLV's David Jenkins Jr. had 14 points in the first half, including four 3-pointers. He made three three-pointers in the first four minutes for UNLV's first nine points.
BIG PICTURE
Mitchell, a senior, moved past three players and into sixth place on the Aztecs' all-time scoring list with 1,408 points. ... This is the first time in school history the Aztecs have won consecutive regular-season conference titles.
UP NEXT
SDSU has seven days off before the quarterfinals of the MWC tournament on March 11.
Postgame notes
Box