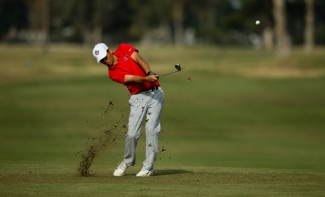 Photo:  P.J. Samiere tied for the Aztecs' low round of the day with a 70 on Saturday at the Bighorn Invite.  Courtesy goaztecs.com

March 24, 2018 (Palm Desert, Calif.) - The San Diego State men’s golf team finished in eighth place at the inaugural Bighorn Invitational on Saturday after recording a collective 1-under-par 287 during the final round at Bighorn Golf Club.

Despite posting a red figure for the second straight round, the Aztecs slipped one notch in the standings, finishing the tournament at even-par 864 on the par-72, 7,200-yard Canyons Course.

Individually, SDSU was led by Puwit Anupansuebsai (Nakhon Phanom, Thailand), who tied for 25th with a 1-under 215 after carding a 74 over the final 18 holes. The Aztec freshman countered two bogeys with a trio of birdies, including a successful conversion after the turn on the par-5, 550-yard No. 3 to get to 2-under for the day. However, a triple-bogey on the par-4 fifth precipitated a drop of 11 places on the leaderboard.

P.J. Samiere (Kailua, Hawaii) finished alone in the 28th position, one shot behind Anupansuebsai with an even-par 216. The SDSU senior tied for the team’s lowest round of the day with a 70, highlighted by five birdies. After logging a double-bogey on the front nine at the par-3 17th, Samiere played spot-free golf the rest of the way, including three drains on his final five holes.

Blake Abercrombie (Rocklin, Calif.) matched Samiere with a 70 on Saturday to climb 11 places into a tie for 33rd at 3-over 219. The Aztec senior notched just one blemish on his scorecard, a bogey on the par-4 11th, but enjoyed a steady round otherwise, posting three birdies to go with a team-high 14 pars.

On the flip side, sophomore Trevor Norby (Carlsbad, Calif.) was unable to gain ground, remaining in the 33rd position after firing a final-round 73. The San Marcos High alumnus registered four birdies on the day, including an impressive make on the par-3, 227-yard No. 4, which ranked as the third-toughest hole of the week. However, four bogeys on the front nine stymied his advance.

Rounding out the SDSU delegation was freshman Steve Sugimoto (San Diego, Calif.), who tied for 46th at 6-over 222 on the heels of a 76. The Rancho Bernardo High product recorded three birdies, which weren’t enough to ease the sting of five bogeys and one double.

With four golfers among the individual top 10, Illinois (-40) ran away with the team title, while Mississippi State (-30) finished a distant runner-up, followed by third-place Colorado (-21). In addition, Kansas and Brigham Young tied for fourth at 13-under.

The Fighting Illini were paced by medalist Bryan Baumgarten (-11), while teammates Dylan Meyer and Giovanni Tadiotto tied for second at 8-under, along with Colorado’s Daniel O’Loughlin and Indiana’s Brock Ochsenreiter.

San Diego State will have one last tune-up before the Mountain West Championships when it competes in the historic Western Intercollegiate, April 7-8, in Santa Cruz, Calif.