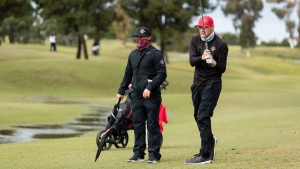 Anupansuebsai fired a final round 6-under 66 to finish regulation in a four-way tie for the lead at 7-under 209 for the tournament. In the first four-golfer playoff in MW Championship history, Anupansuebsai birdied the second playoff hole (par-5, 511-yard 10th hole) to beat out New Mexico’s Sam Choi and Boise State’s Hugo Townsend, each who parred the 10th (UNLV’s Jack Trent was eliminated with a bogey on the first playoff hole (par-4, 470-yard 18th hole).

With the win, San Diego State became the first school with an individual medalist at both the men’s (Anupansuebsai) and women’s (Sara Kjellker) MW Championship since TCU in 2012. It has now happened six times in league history.