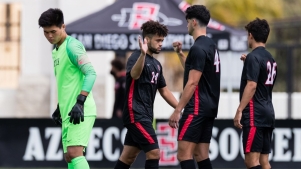 The Bruins outshot the Aztecs 25-9, including a 13-1 advantage in the second half and also attempted 16 corner kicks while SDSU had zero.

“It ended in a draw, but it felt more like a loss,” head coach Ryan Hopkins said after the match. “I thought we did enough to win, but we failed to get organized on their set pieces.”

The Aztecs jumped out to an early lead when Iñigo Villaldea finished a free kick from about 25 yards out, from a similar spot to where he scored against Cal two weeks ago.

Just moments later, UCLA had a dangerous opportunity that was stymied by goalkeeper Tetsuya Kadono, to force a corner kick. Off that set piece, the Aztecs were whistled for a foul in the box. Kadono came up big again, saving Riley Ferch’s PK attempt to preserve SDSU’s lead.

In the 31st minute, the Aztecs extended their lead with a beautiful strike from Andre Ochoa that found the back of the net from 20 yards out.

From that point on, UCLA had the Aztecs on their heels and SDSU attempted just three more shots in regulation while the Bruins had 15.

UCLA got on the board in the 40th minute when Tommy Silva headed in a Riley Ferch corner.

UCLA nearly scored in the 73rd minute when they had a cross that found a Bruin in the box with the SDSU defense out of position, but their header went over the crossbar.

The Bruins netted the equalizer in the 79th minute on a cross that followed a corner. This time Silva provided the assist and Kevin Diaz finished it.

While the Aztecs had just one shot in the second half, they had two in the first period of extra time including a Tevenn Roux breakaway that was just a little too strong.

The Bruins didn’t have a threatening strike in extra time.

This was the first time the Aztecs recorded two results (win or draw) against UCLA in a season since 2007. SDSU tied the Bruins 1-1 in their season opener.

17 different Aztecs made an appearance including Ryan McCusker and Esteban Zepeda, who made their season debuts.