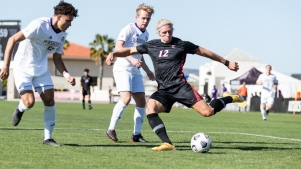 The Aztecs got their first goal in the 24th minute from Tristan Weber off a set piece from 30 yards out. Set up directly in front of the goal, Weber hammered a shot into the upper right corner for a 1-0 San Diego State lead. It was his first goal of the season.

SDSU struck again at the 36:42 mark. Arturo Chavez picked up a ball on the left side, which keeper Tetsuya Kadono had punched away from his line. Chavez fed Andre Ochoa, who continued down the left side and then found Austin Wehner who was sprinting down the middle of the field. Wehner took one touch and fired the ball back across his body into the bottom of the left corner for the two-goal lead.

The Huskies outshot San Diego State 18-6, but nine of Washington’s attempts were in desperation time, when they were pressing to try to get back in the game.

Kadono made eight saves and earned the second clean sheet of his college career.

The Huskies Lucas Meeks led his team with five shots and keeper Sam Fowler made one save.

SDSU put half of their six shots on frame and scored on two of them.

San Diego State picks up its first win of the season and defeats a ranked opponent for the first time since a 1-0 victory over No. 11 Washington on Nov. 6, 2016, a span of 14 games against top-25 competition.

The Aztecs travel to Stanford (7-1-1) Saturday, a team SDSU lost to 1-0 in overtime earlier this season.