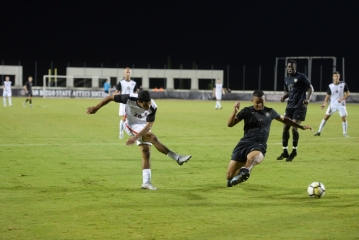 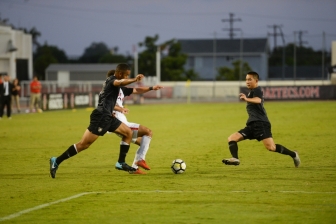 The Aztecs kept getting some good chances, including a near miss over the crossbar by senior Ilai Shvika, but it was a trio of redshirts that included two transfers hat got the job done.  In the 22nd minute, senior Damian German (Grand Canyon) passed to sophomore Keegan Kelly (Maryland), who made a nice bicycle pass to redshirt junior Pablo Pelaez in the crease and Pelaez tapped it past West Point junior keeper Justin Stoll to put the Aztecs ahead.  More good chances followed, but the Aztecs took that lone goal to the locker room and led 1-0 after 45. 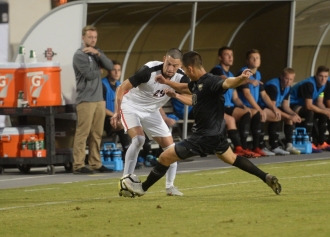 The Aztecs held onto that lead until the 58th minute of the second half when a costly tackle awarded Army a penalty shot.  Junior Keenan O’Shea took it and scored easily, giving the Black Knights the equalizer they needed.  SDSU fought hard, but Army was just too fast and in the 80th minute, SDSU tried to block the West Point attack, but sophomore Christian Takaki made it past everyone and tapped it in and gave the Black Knights the 2-1 win.  SDSU falls to 0-2-1 (not counting their exhibition win against Point Loma Nazarene) on the year. 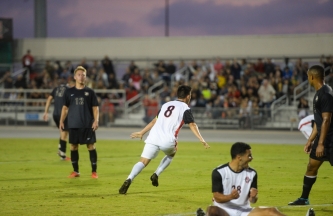 Next Friday, the male scarlet and black footballers kick off the San Diego Central Tournament, starting with a match against LIU Brooklyn.  First tap at the SDSU Sports Deck is set for 7:00 p.m.