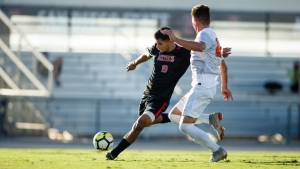 SDSU quickly jumped out to a 1-0 lead with a fourth minute goal then put the game out of reach with a converted penalty kick in the 86th minute.

In the fourth minute, Damian German took advantage of a misplay by a Torero defender to corral the ball on the right wing. Sprinting towards the box, the USD goalkeeper charged and slid, but German was able to slip the ball past him and inside the far post.

A skirmish broke out in the 17th minute, causing the referee to issue a pair of yellow cards, one to each team.

In the 35th minute it appeared the Aztecs had extended their lead to 2-0 when DJ Villegas finished an Ilai Shvika cross, but Villegas was whistled for being offsides.

The Aztecs had an 11-2 advantage in shots in the first half. SDSU has allowed just two first half goals this season.

The Toreros’ best opportunity came off a free kick in the 85th minute. Miguel Berry launched a free kick from 25 yards out to the upper right corner and Aztec goalkeeper Max Watkin made a diving save.

Just a few minutes later, Arturo Chavea was tackled hard in the box by USD’s Aaron Frey, resulting in a penalty kick, which Pablo Pelaez converted for his team-high sixth goal of the season.

Max Watkin earned his second shutout of the season and evened his record at 2-2-0.

Damian German had seven shots, the most an Aztec has attempted in a match this year.

The Aztecs’ fourth minute goal was the earliest goal in a match for SDSU this season.

For the first time this season, the Aztecs did not make any substitutions in the first half. SDSU made their first sub in the 64th minute.

The Aztecs return to Pac-12 play next week, traveling to the Pacific Northwest for matches at Oregon State (Oct. 25) and at Washington (Oct. 28).