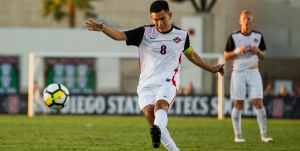 Cal outshot the Aztecs’ 10-5 and had five shots on goal while the Aztecs had none.

Despite not having any shots on goals, the Aztecs played very well defensively, especially in the first 30 minutes of the match.

Cal had two scoring opportunities in a three minute span late in the first half. The first came in the 37th minute and Cameron Hogg made a great save to deflect the ball out of bounds. In the 40th minute, the Bears nearly scored on a header, but their attempted missed just high.

Cal found the back of the net in the 60th minute when the Pac-12’s leading goal scorer Shinya Kadona finished an assist from Taylor Davila. Kadona has ten goals on the season.

Goalkeeper Cameron Hogg (4-4-1) had four saves, but was saddled with the loss. Cal’s Drake Callender registered the shutout, but did not face a shot on frame.

For the second match in a row, the Aztecs attempted just one corner kick. They entered Pac-12 play, leading the conference in corner kicks attempted per game.

The Aztecs entered Pac-12 play on a four match win streak, scoring two goals in each of those wins. However, SDSU has now been shutout in their last two matches.

The Aztecs return to San Diego to host Oregon State Thursday at 4:00 p.m.