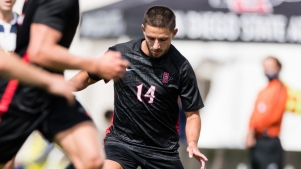 The Beavers held a 17-10 advantage in shots and 7-3 in shots on frame. This was the first time SDSU has been shut out or lost by more than one goal this season.

The Beavers’ first goal came in the 9th minute after Joel Walker took the ball down the right wing and then found Gloire Amanda in the middle of the box, who took a touch and then scored with his left foot.

Oregon State’s next goal came on a PK in the 31st minute from Tsiki Ntsabeleng. The Beavers scored again on a penalty kick in the 50th minute, this time it was Amanda who found the back of the net, scoring his 11th goal of the year, the most in the nation.

The Beavers’ final goal was in the 71st minute from Javier Armas with assists coming from Amanda and Walker.

The Aztecs started 10 underclassmen and six freshmen. Junior Tristan Weber was their lone upperclassman in the starting XI, while freshmen Fritz Oestreicher and John Foltyn earned their first collegiate start.

Freshmen Kevin Peraza and Aiden Hanes (goalkeeper) made their collegiate debut, coming off the bench in the second half.

The Aztecs come back home and will host both UCLA (Wednesday) and No. 7 Washington (Sunday) next week.