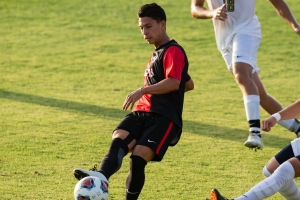 August 24, 2018 (Santa Clara) - The San Diego State men’s soccer team fell in their season opener 2-0 at Santa Clara Friday evening. The Broncos scored the game-winning goal on a PK in the 64th minute and then added an insurance goal in the 88th minute.

The Broncos had 15 shots to the Aztecs’ three, but only put three on goal while the Aztecs had one on frame.

Santa Clara was able to create opportunities throughout the first half, totaling 10 shots. They cracked the scoreboard midway through the second frame after a SDSU foul in the box. The Broncos’ Andres Jimenez netted the goal low and left, just past the outstretched arms of goalkeeper Cameron Hogg.

The Aztecs’ comeback attempt was thwarted late in the match. In the 86th minute Tevenn Roux was whistled for his second yellow card, resulting in a red and forcing SDSU to finish with 10 men.

Shortly after, the Broncos put the match out of reach with their second goal. Alan Camacho Soto sent a cross from the right wing that found the head of Javier Ruiz Duran in the 88th minute.

Cameron Hogg was saddled with the loss, allowing two goals and making one save. The Broncos’ Dakota Havlick recorded one save in the shutout.

The Aztecs continue their Bay Area road swing with a Sunday match at the University of San Francisco. Kickoff is set for 3:00 p.m.

There were 38 fouls called in the match, with 23 being whistled on the Aztecs.