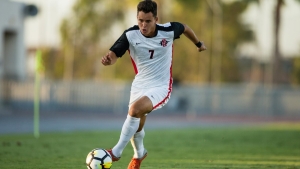 Aztecs have won four matches in a row

Pablo Pelaez converted a penalty kick 65 seconds in to the match and then redshirt freshman Laukoa Santos scored from 25 yards out at the five minute mark.

“We’ve been working hard all year and to win four games in a row is a great reward,” Santos said after the match. “We are loving every second of it.”

Playing in front of a rowdy and vocal crowd, six cards were issued on the night, including a red card to the Rebels’ John Lynam in the 36th minute. With the two goal lead, and with UNLV playing a man down, SDSU subbed frequently and finished with 14 Aztecs playing at least 40 minutes.

Pelaez’s PK came after Damian German was taken down just inside the box. This was the Aztecs’ first PK attempt on the year and Pelaez converted it with ease for his team-high fourth goal of the year.

A few minutes later, Keegan Kelly beat his man on the end line and sent a pass to Santos at the top of the box and he bent it inside the near post past the outstretched arms of the UNLV keeper. This was Santos first career collegiate goal.

“Laukoa’s greatest strength is from that side and hitting that type of ball,” Head Coach Lev Kirshner explained after the match.

In the 36th minute, a skirmish broke out between the two squads in front of the UNLV bench. When the dust settled, the Rebels’ instigator, Lynam, was given a red card and the Aztecs’ Damian German earned a caution.

From that point on, the Rebels, who were playing with urgency, outshot SDSU 9-4. After not having a shot on goal in the first half, they had three in a ten minute span early in the second frame.

“We came out with the right intensity in the first 20 minutes and we kind of overwhelmed them,” senior centerback Aleks Berkolds said. “They couldn’t get anything on us, especially in our half. As the game went on, we kind of lost that, but we held strong in the back and stayed connected within our lines. They were a good attacking team, but we held tight and it was a team effort.”

The Rebels got on the board in the 77th minute when Marco Gonzalez scored his seventh goal of the year. Three minutes later, they nearly scored the equalizer on a header off a corner, but Cameron Hogg was able to deflect the ball outside the post.

UNLV appeared to tie the match in the 83rd minute, scoring off a through ball, but they were whistled for offsides, negating the goal.

After five straight home matches, the Aztecs will begin Pac-12 play on the road with a Thursday match at Stanford at 5:00 p.m. The match will be shown on the Pac-12 Network.

“He played extremely well tonight and did a lot of good things for us on both sides of the ball.” Head Coach Lev Kirshner

The Aztecs finished with 12 shots, which came from 11 different players.

The Aztecs have scored exactly two goals in every match in their current four game winning streak.

The last time the Aztecs won three matches in a row was early in the 2016 season when they won four straight (Aug. 28- Sept. 1).

“We are excited and ready. We’ve got four wins in a row now and we are going to have some good training sessions the next few days and we are going to come out with the right fire and show the Pac-12 what we can do.” –Aleks Berkolds on entering Pac-12 play