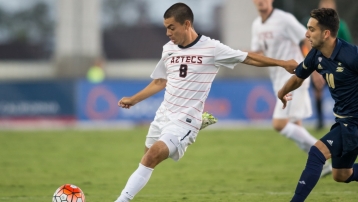 SDSU grabbed a 1-0 lead in the 14th minute when Pablo Pelaez connected on a free kick from 25 yards out. The Dons, who played a man down for the final 69 minutes, netted the equalizer in the 62nd minute.

After the Aztecs went up 1-0, the Dons would manage just one more shot in the first half. SDSU totaled five first half shots, putting two on frame.

Shortly before the half, USF’s Ashish Chattha was issued a red card, forcing the Dons to play with 10 for the remainder of the match. This came less than a minute after the Dons’ Sandro Badara was given a yellow. Like the season opener at Santa Clara, the match was very physical. Four cards were issued and 36 total fouls were called with the Aztecs being whistled for 19.

The momentum swung to the Dons in the second frame with USF attempting eight shots to the Aztecs’ six. San Francisco knotted the match at one goal apiece in the 62nd minute when Cameron Martin scored off a Noah Leong rebound.

In the waning minutes of regulation, Hampus Bergdahl created multiple opportunities and had three shots attempts in a three minute span. Those were Bergdahl’s only three shots of the match.

The Aztecs retook the momentum in extra time, controlling the pace and keeping the ball on USF’s side of the field. SDSU outshot the Dons 6-0 in extra time, but couldn’t find the back of the net.

The Aztecs will host Army West Point Friday evening at 7:00 p.m. at the SDSU Sports Deck for their home opener.  Stay tuned to our Twitter feed, @ECMagSports, to find out if ECM Sports will have live coverage of this game.

The Aztecs had six shots on goal, coming from five different players. Robby Jacobs led the Aztecs with two shots on goal. Laukoa Santos had a match-high four shots.

The Aztecs did not have a single draw last season. Their last draw came in the final match of the 2016 season when the Aztecs and UNLV tied 1-1 in the first round of NCAA Tournament. The Rebels advanced to the next round after winning PKs 6-5.