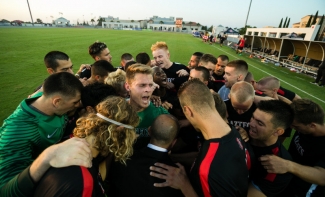 Aztecs extend scoreless streak to 256:05 in fourth win of the year

September 24, 2017 (Edinburg, Tex.) - Behind a Kyle Adams fourth minute goal, the San Diego State men’s soccer team capped a perfect weekend in the Lone Star State, defeating Incarnate Word 1-0 on Sunday night. The Aztecs now head into conference play with an even 4-4 record, while Incarnate Word falls to 2-4-1 on the season.

With only one first-half shot, the Aztecs made the most of a limited amount of offensive opportunities, as Adams converted on a header after a Dallin Cutler corner kick and Thom Van den Berg pass. Both Cutler and Van den Berg were credited with assists, earning their third and second helpers of the year, respectively. Cutler leads the Aztecs with three assists during the 2017 campaign.

The Aztec defense recorded its second consecutive shutout and extended its scoreless streak to 256:06 with Sunday night’s effort. Defenders Spencer Madden, Ilai Shvika, and Adams played all 90 minutes of action on the SDSU backline, helping limit UIW to four shots on goal. Adam Allmaras recorded four saves en route to his second shutout and third win of the year.

The Aztecs now look towards the start of Pac-12 Conference play and will host two-time defending national champion Stanford this Thursday night at the SDSU Sports Deck. The Aztecs-Cardinal contest is scheduled to begin at 7:00 p.m. PT.  ECM will have live coverage of Thursday night's game, which you can find by following @ECMagSports on Twitter.