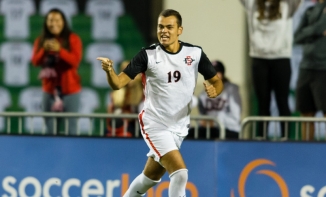 July 19, 2018 (San Diego) - San Diego State men’s soccer head coach Lev Kirshner has revealed the Aztecs’ schedule for the upcoming 2018 season. SDSU will have seven matches against teams that reached the 2017 NCAA tournament, including two dates with Stanford, the 2017 national champion. Their season kicks off August 24 at Santa Clara.

The Aztecs will play a pair of friendlies before their regular season gets underway. First, an August 12th match at UC Santa Barbara, then the Aztecs will have their final tune-up August 18th against Point Loma Nazarene.

The 2018 season officially gets underway the following weekend when the Aztecs travel to the Bay Area to take on Santa Clara August 24th and San Francisco, a postseason team in 2017, on Sunday, August 26th. In 2017, the Aztecs beat Santa Clara 3-1, but fell to USF 2-1.

SDSU then begins a stretch of five consecutive home matches beginning with their home opener against Army, Saturday, September 1. In total, the Aztecs will play nine of their 11 matches from September 1 to October 19 in San Diego.

The Aztecs will then co-host the Courtyard Marriott San Diego Central Aztec Soccer Tournament with Loyola Marymount. SDSU will be hosting LIU-Brooklyn (Sept. 7) and UC Irvine (Sept. 9) as part of the tournament.

The Aztecs will wrap up their non-conference schedule with home matches against Brown (Sept. 14) and UNLV (Sept. 24). The September 14th match vs. Brown is part of a doubleheader with the women’s team, who will be facing Pepperdine beforehand.

Similar to years past, the Aztecs will play each of the five Pac-12 schools twice (home and away). SDSU begins their conference schedule at Stanford, the 2017 NCAA champion, on September 27th. While in the Bay Area, the Aztecs will also play at California (Sept. 30).

SDSU will play their next four matches in San Diego. After hosting Oregon State (Oct. 4) and Washington (Oct. 7), another 2017 postseason team, the Aztecs will welcome their travel partner, UCLA, for an October 13th match.

The Aztecs will take a break from Pac-12 play the following week and will play at the University of San Diego on October 19th.

SDSU returns to conference play the following week, traveling to the Pacific Northwest for matches at Oregon State (Oct. 25) and Washington (Oct. 28).

The Aztecs will return to the Sports Deck for their final two home matches, getting another crack at Stanford (Nov. 1) and California (Nov. 4).

SDSU wraps up the regular season November 8th with a match at UCLA.

Tickets to all San Diego State home matches are free to the public.