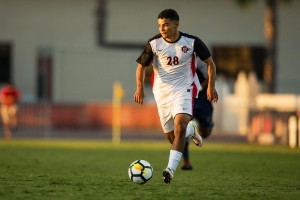 September 14, 2018 (San Diego) - The Aztec men’s soccer team (3-2-1) won their third match in a row with a dominating 2-0 win over Brown Friday evening. Damian German, a transfer from Grand Canyon, scored both goals, one in each half and the Aztecs outshot the Bears 18-3.

“The team is starting to hit their stride. We had a lot of new players coming in and we are getting better and better each game.” Coach Kirshner praised after the match. “This was our best performance of the year. We did just about everything right. We got the shutout, we got two goals, had control of the game and played very well. I’m very excited by the group and their progress as we get closer to Pac-12 play.”

The Aztecs controlled the tempo and pace of the match from the kick off, but had struggles converting their advantage in possession in to scoring opportunities in the first 30 minutes.

SDSU would break through in the 35th minute. After receiving a pass near the top of the box from Emil Kjellker, Damian German (pronounced dom-yon her-mahn) spun and dribbled parallel to the goal before firing across his body to score his first goal as an Aztec.

“I was able to turn and create some space for myself, then a defender was coming in hard so I took one more touch to have the whole near post open because the keeper was cheating," German said after the match.

The Aztecs never looked back after that and played their most complete half of the season in the second frame, outshooting the Bears 11-0.

“In the second half, we came out and completely dominated the game,” midfielder Keegan Kelly said. “We didn’t give them any chances in the second half and it was definitely a complete performance.”

German’s second goal of the night came after AJ Valenzuela played a long through ball up the middle to set up a one-on-one with the keeper, which German easily converted

“AJ and I played together in the summer [on FC Tucson] and he slipped me a lot balls that I scored a lot of goals on,” German explained. “When I saw AJ on the ball with time and space, I knew the ball was going to get to me.”

The strong offensive performance by the Aztecs led to their strong defensive effort as they didn’t allow a single shot on goal all evening.

The Bears only threatened once. Late in the match, John Vrablic dribbled down the left wing to the end line and sent a dangerous cross in to the box, but goalkeeper Cameron Hogg punched the ball away from danger.

Hogg (3-2-1) won his third match in a row and recorded his first shutout of his Aztec career.

The Aztecs have ten days off until their next match when they host UNLV September 24th.

“Damian was special tonight. He’s been getting all the stuff in between the boxes very well and tonight he found the back of the net and for goal scorers that’s a really important thing. Hopefully his momentum carries in to Pac-12 play.” Coach Kirshner

The Aztecs had 11 corners, while holding Brown to two, which came in the match’s final minutes. They have now “out-cornered” their opponents 39-15 on the season.

“I’ve never wore a high number before like 28. I felt like it was cursed for me, so when I heard 19 was open, I thought I’d give it a shot. Then I got two goals with it, so now I’ll definitely stick with 19.” --Damian German after switching jersey numbers from No. 28 to No. 19 prior to the match