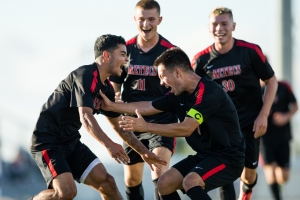 Damian German scored the game-winning goal in the 60th minute

“I’m very proud of the team,” Head Coach Lev Kirshner said after the match. “It was a very difficult weekend where we played really well, but just had some lapses that our opponents made us pay for. To turn around and put together a performance like that is very encouraging and speaks to the character of this group.”

Following a 0-2-0 weekend to begin the conference season, Coach Kirshner shook up the starting lineup, inserting Max Watkin in goal and Dane Rozas as the starting center back. Watkin, in his first start of the year and second of his career, pitched a shutout and nullified some dangerous chances from the Beavers.

“I’m very comfortable starting anyone on this team,” Coach Kirshner explained. “Max did well, getting a shutout in his first start of the year. It doesn’t get much better than that. Max is a winner and came in and performed admirably.”

The Beavers were the first to threaten. In the 14th minute, Joel Walker got behind the Aztec defense, but Watkin made a great save in his first test of the season to force the corner.

After attempting six shots in the first half, the Aztecs had four in the first 10 minutes of the second half, including a dangerous left footed strike from Pelaez that resulted in a nice save by the Beavers’ netminder Adrian Fernandez.

“We started off a little slow. Oregon State did a good job of keeping us on our heels. In the second half, we came out with a different mentality,” Pelaez stated.

Shortly after, in the 60th minute, after receiving a pass from Adam Vargas, Pelaez lofted a ball over the top of the OSU defense to a streaking Damian German, who finished in the top left corner of the goal.

“I got the ball and peeked over and saw Damian making a good run in between their outside and center back, so I played him in, and he knows what to do and he tucked it away,” Pelaez said.

After the Aztecs’ goal, the Beavers went into attack mode and created several opportunities, but SDSU was able to keep them out of the center of the pitch.

The Beavers’ closest call came in the 67th minute when Don Tchilao sent a pass across the box to an open Sofiane Djeffal at the far post, but the pass went just wide and the Aztecs’ shutout was preserved.

Watkin made two saves as the Aztecs collected their second shutout of the year. The Beavers’ Adrian Fernandez made four saves, but was saddled with the loss.

“Damian was problematic for Oregon State. He held the ball up well for us, drew fouls and got the game-winning goal on unbelievable pass from Pablo. Although, it is splitting hairs picking a man of the match after tonight. I could’ve gone with five different guys.” – Head Coach Lev Kirshner

Goalkeeper Max Watkin recorded a shutout in his first start of the season and just the second of his career. Entering the match, he has played just 128 collegiate minutes and blanked the Beavers, who scored a season-high four goals in their last match against Oregon State.

“After the first ten minutes I got in my rhythm and then it was back to usual. After being out for a while, it is hard to get back in the flow of the game, but I know what I’m capable of and I trusted my teammates. It feels great to the get the W.” Goalkeeper Max Watkin

The Aztecs have allowed just two first half goals through ten matches.

San Diego State improved their record at home to 5-1-0.

The Aztecs continue Pac-12 play on Sunday when they host Washington at 11:30 a.m.

ECM Sports will have live coverage of Sunday morning's game.