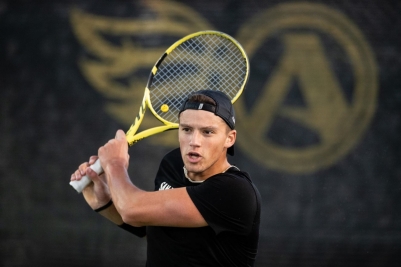 In the first match of the day the Aztecs suffered their fifth straight defeat, dropping to 2-5 overall, while Gonzaga moved to 7-1 on the season. SDSU then rallied and blew out Pomona-Pitzer 6-1 in their second match of the day to improve to 3-5 on the year.

SDSU started off strongly against Gonzaga. On court one Alexander Mandma and Joe Tyler earned a hard-fought win, 6-3, to put the Aztecs in pole position for the doubles point. Victor Castro and Johannes Seeman clinched the doubles point for the Aztecs on court two, where they won 6-3. SDSU’s duo of Jules Auffray and Judson Blair were also winning on court three 5-4 before play was stopped.

At the No. 1 slot, Tyler continued his strong start to the season with a 6-2, 6-2 straight sets win over Sasha Trkulja. Seeman then battled valiantly on court two, especially in a tightly contest first set, but fell on court two to Gonzaga’s Hollingsworth 6-4, 6-0.

As for courts three and four, the Aztecs couldn’t quite come out on top. In the only match to go three sets, Castro took the first set over Gonzaga’s Oliver Andersson 6-3, but then fell in back-to-back sets 3-6, 1-6. Over on court four, Gonzaga’s Arthus De La Bassetiere took down Mandma 6-0, 6-4.

Auffray also dropped his match at the No. 5 spot. After falling in the first set 6-0, he battled hard throughout the second, but came up short, falling 6-4 in the second set. Finally, at the No. 6 slot the Aztecs got their third win of the match. Blair took down Leon Rodier 6-2 in the first set and came out on top in a back-and-forth second set,\ 7-5.

As for San Diego State’s second match of the day, the Aztecs bounced back in a big way with a 6-1 win over Pomona-Pitzer.

The Aztecs swept the doubles point again. Tyler and Mandama combined for their second win of the day on court No. 1, a 6-0 win in which they did not drop a single game. Castro and Seeman followed suit at the No. 2 spot with a 6-2 win to clinch the doubles point. Auffray and Blair were also up in their doubles match 5-2 before play was stopped.

As for singles play, all six matches were won in straight sets. Tyler continued his hot streak, winning his fourth match of the day at the No. 1 spot, with a 6-2, 6-0 dispatching of Hayden Snyder of Pomona-Pitzer. In the No. 2 spot Mukund Madabhushi earned the lone point of the day for the Sagehens. He won the first set over Castro 6-3 and was up 2-1 in the second set when Castro was forced to retire.

Judson Blair won his second singles match of the day on court five, where he took down Jansen Comadena 6-2, 6-4 to increase SDSU’s advantage to 5-1. Roni Rikkonen wrapped play up for the Aztecs on court six where he beat Owen Kelley 6-1, 6-2 to give San Diego State the 6-1 win.

San Diego State will next head across town to La Jolla where they will take part in the prestigious Pacific Coast Doubles Championships set for March 4-6 at La Jolla Beach and Tennis Club.