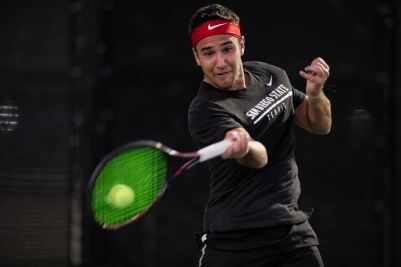 March 29, 2022 (Los Angeles) - The San Diego State men’s tennis team pushed four of its six singles matches to a tiebreaker in the final set and three matches went to three sets, but the Aztecs were upended 7-0 against the No. 59 UCLA Bruins on Tuesday afternoon at the Los Angeles Tennis Center.

“We had an opportunity today,” Aztec head coach Gene Carswell said. “There were lots of close matches in singles, but by Aztec standards, we had a below average start in doubles.”

With the loss the Aztecs are 5-8 in dual-match competitions, while UCLA improves to 6-8 on the season.

In doubles, the Aztecs were leading in the No. 2 match, 4-3, at the juncture where UCLA secured the point with its second victory.

SDSU’s No. 1 team, Joe Tyler and Alexander Mandma, were bested by the Bruins’ Alexander Hoogmartens and Bryce Pereira 6-2, while the Aztecs No. 3 team of Judson Blair and Jules Auffray lost to UCLA’s Stefan Leustian and Karl Lee 6-1. Johannes Seeman and Victor Castro, SDSU’s No. 2 doubles team, were up on Giacomo Revelli and Max Wild when the doubles point was no longer in question.

Down 1-0 on the scoreboard, San Diego State fought hard in all its singles matches, but failed to break through against the Bruins.

On the No. 3 through No. 5 singles courts, each match went to three sets with two requiring a tiebreaker to determine a winner.

Mandma also dropped his first set at No. 4, then rallied for a 6-2 win in the second to force a third set but couldn’t carry that momentum to close the match out and was defeated 7-5 in the final set.  Auffray was topped 6-3 in his opening set at No. 5, bounced back to win 7-5 in the second and went to a tiebreaker in the third, but was beaten 7-6 (4) in the last set.

The Aztecs are off for a week and a half before heading to Las Vegas and a Mountain West meeting with the UNLV Rebels on Friday, April 8. First serve is set for 11 a.m. PT.