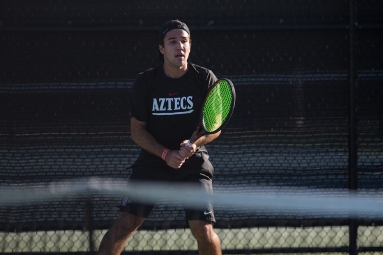 With the setback, the Aztecs dropped their fifth in a row and remain winless in conference play at 0-4, slipping to 3-11 on the season. On the flip side, the Lobos kept their spotless MW record intact at 4-0, improving to 6-8 overall.

SDSU was stymied for much of the day, mustering just one victory at No. 3 doubles where the tandem of Aaron Pollanen and Rafael Gonzalez Almazan toppled the UNM duo of Stepan Holis and Alex Maggs 6-4.

With the win, the Aztecs evened the round after Johannes Seeman and Victor Castro had their five-match winning streak snapped in a 6-3 defeat to 59th-ranked Dominic West and Sergio Molina at the No. 1 position.

However, SDSU was thwarted in its bid to claim the early lead, as the UNM pairing of Raul Dobai and Jake Trondson edged Ignacio Martinez and Judson Blair in a tiebreaker, 7-6(3), in the second slot.

Stung, the Aztecs were unable to generate any momentum in singles play, dropping all three completed matches.

Over on the No. 1 court, Seeman fought valiantly in the first set of his encounter with Dobai but ultimately lost steam in a straight-set defeat 7-6(3), 6-2.

With the requisite four points secured for the Lobos’ team victory, the remaining three matches were abandoned. Pollanen nursed a slim 6-5 lead in the second set against Molina at No. 4 after dropping the opener 6-3.

At No. 3, Martinez found himself in a tight battle during the second set against Holis, where he trailed by a 4-3 count after falling in the first by an identical 6-3 count.

San Diego State returns to the friendly confines of Aztec Tennis Center next week to open a five-match homestand, starting Friday, April 16 when it entertains Fresno State in a Mountain West showdown starting at 2 p.m.