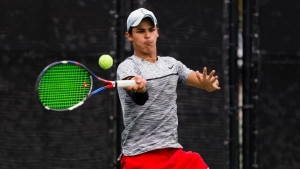 SDSU notched its second consecutive doubles point in the whitewash before claiming the first three decisions in singles play to raise its record to 5-4 overall. The Aggies, meanwhile, slip to 7-4 on the season.

Thursday’s result also marked the Scarlet and Black’s first shutout since April 29, 2016, when it defeated Air Force, 4-0, in the first round of the Mountain West tournament.

After the Aztec tandem of Sander Gjoels-Andersen and Rafael Gonzalez Almazan fell victim to UC Davis’ David Goulak and Ivan Thamma by a 6-3 count at the top of the doubles ladder, Jan Kirchhoff and Ignacio Martinez quickly turned the tables for SDSU with a 6-3 conquest of their own over Daniel Landa and Alex Scemanenco in the No. 2 position.

With all eyes glued on court No. 3, Fabian Roensdorf and Gavin Spencer prevailed by a 6-4 tally over Dariush Jalali and Chethan Swanson to give the host school a 1-0 lead it would not relinquish.

Shortly thereafter in singles, the Aztecs make quick work of the Aggies, including Gjoels-Andersen, who led off with a 6-1, 6-3 thumping of Goulak in the second slot, while Martinez soon followed with a 6-2, 6-4 defeat of Giraldez at No. 3.

Moments later, Gonzalez Almazan provided the requisite fourth point for victory with a 6-1, 7-5 triumph over Landa in the fifth position.

With the dual match outcome no longer in question and a full weekend tournament slate on the docket for both sides, the remaining three matches were abandoned.

In the sixth spot, Arnaud Restifo was tied in the second set of his encounter with Arjith Jayaraman, 5-5, after cruising through the first 6-1, while Roensdorf found himself facing a 1-0 deficit in the second set vs. Thamma on the No. 1 court after dropping a tiebreaker, 7-6(1).

In addition, Kirchhoff was on the wrong side of a 3-2 score in the second set of his match vs. Swanson after falling short in the first, 6-3.

San Diego State continues its busy weekend when it competes in the 130th annual Pacific Coast Doubles Championships March 1-3 at La Jolla Beach and Tennis Club. The Aztecs will return to dual match play on Saturday, March 16 when they host No. 35 San Diego on The Mesa starting at noon.