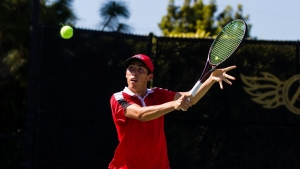 October 5, 2018 (San Diego) - The San Diego State men's tennis team made its home debut at the 2018 Aztec Fall Invitational on Friday with four of the squad’s eight players hitting the courts at Aztec Tennis Center.

The SDSU quartet split its all singles matches, including Rafael Gonzalez Almazan (Madrid, Spain), who claimed a three-set decision over Grand Canyon’s Nicolau Macedo in his opening encounter in the Warrior Flight by count of 6-4, 5-7, 6-3. However, the Aztec junior was stymied in his advance, falling in the round of 16 to Aaron Bailey of UC Irvine, 6-1, 6-1.

On the other hand, David Hough (Traralgon, Australia) was upended in his round of 32 match against Southern Utah’s Remus Cope. Making his first appearance of the fall campaign, the Aztec junior captured the first set by a 6-1 tally, but was unable to vanquish his Thunderbird adversary, dropping the final two sets by scores of 6-3, 6-1. However, Hough rebounded in the consolation draw with a 6-3, 6-3 triumph over Grand Canyon’s Leo Andreoll.

Over in the Aztec Flight, senior Raul de la Torre (Calexico, Calif.) saw his first action of the new season as well on Friday, holding off UC Irvine’s Mateusz Smolicki in the round of 32, 6-4, 3-6, 6-2, but was unable to replicate the feat against his subsequent opponent Tadiwa Chinamo of Pacific, who emerged triumphant in straight sets, 6-0, 7-6(5).

Earlier in doubles action, Hough and Mitchell opened the Black Flight with a 6-2 conquest of UCSD’s Riku Hashiyada and Richard Han, but Gonzalez Alamazan and de la Torre were dispatched by the Grand Canyon pairing of Valentin Lang and Jakub Novak, 6-4.

The Aztec Fall Invitational continues on Saturday with doubles play starting at 9 a.m. followed by singles competition. Admission is free to the public.