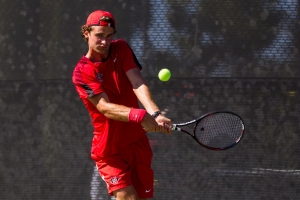 October 18, 2018 (Malibu) - The San Diego State men's tennis team completed its first day of competition at the ITA Southwest Regional Championships, posting two victories in doubles competition to go with a triumph in singles play at Ralphs-Straus Tennis Center on the campus of Pepperdine University.

In round of 64 doubles action, the Aztec duo of junior Arnaud Restifo and sophomore Ignacio Martinez opened with an impressive 8-5 decision over UCLA’s Connor Rapp and Max Wild, while the pairing of senior Raul de la Torre and sophomore Jan Kirchhoff edged Cal Poly’s Alexander Stater and Roman Shenkiryk in a tiebreaker, 8-7(6).

However, SDSU came up empty in the round of 32, as all three tandems fell short in their respective matches. After receiving a first-round bye, senior Sander Gjoels-Andersen and junior Rafael Gonzalez Almazan suffered a tough 8-7(4) defeat at the hands of UC Santa Barbara’s Joseph Guillin and Hironori Koyanagi. In addition, Restifo and Martinez their progress stymied in the bracket by USC’s Brandon Holt and Riley Smith, who prevailed by an 8-5 tally, while de la Torre and Kirchhoff experienced their own reversal of fortune against another Trojan combo in Jack Jaede and Jake Sands, who emerged with a narrow 8-7(6) victory.

Stung, the Aztecs were unable to flip the switch in their afternoon singles matches, with Gjoels-Andersen the lone player to record a win in eight encounters. The Klampenborg, Denmark, native dispatched UC Irvine’s Antoine Barthe in the opening round by a 6-3, 6-3 count, but could not duplicate the feat in the round of 64, dropping a tough three-set decision to Cal Poly’s Antoine Noel, 6-2, 3-6, 6-4.

Earlier, Restifo and Martinez also found themselves in tight three-set battles before ceding their first-round matches. Restifo gave Pepperdine’s Matias Sborowitz all he could handle, but ultimately ran out of steam, 7-5, 6-7(9), 6-2, while Martinez fell victim to Loyola Marymount’s Diego Nava in similar fashion, 6-1, 4-6, 6-2.

The rest of the SDSU delegation suffered straight-set defeats, including de la Torre, who was toppled by UC Irvine’s Aaron Bailey, 7-6(4), 6-0, while Kirchhoff was dismissed by another Anteater adversary in Daniel Gealer, who claimed a 6-3, 6-4 decision. Elsewhere, Gonzalez Almazan found himself on the wrong side of a 7-5, 6-3 score against UCSB’s Anders Holm, while junior Nicholas Mitchell experienced a 6-2, 6-2 setback at the hands of USD’s Noah Dufort.

The ITA Southwest Regional Championships resume on Friday with one round of singles consolation play awaiting the Aztecs.