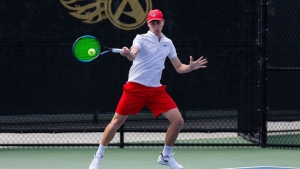 October 17, 2019 (Malibu) - The San Diego State men’s tennis team completed the first day of action at the ITA Southwest Regional Championships, with the doubles tandem of juniors Ignacio Martinez and Aaro Pollanen advancing to the main draw round of 16, while fellow classmate Jan Kirchhoff remains alive in the main singles draw at Ralphs-Straus Tennis Center on the campus of Pepperdine University.

Martinez and Pollanen received a first-round bye before outlasting Loyola Marymount’s Lucas Moreno and Ethan Prost by an 8-6 count in the round of 32. With the victory, the Aztec duo is scheduled to play another LMU combo in Max Kaiser and Ryan Brown on Friday at 9 a.m. in the round of 16.

Kirchhoff, who also earned a bye in the opening singles round, found himself in a tight battle with UC Santa Barbara’s Luka Vukmanovic in the round of 64, but turned on the afterburners in the second set to win going away, 7-6(6), 6-1. As a result, the Berlin, Germany, native will square off against Cal Poly’s Antoine Noel in the round of 32 on Friday at 10:15 a.m.

Earlier, SDSU opened with five singles victories in the round of 128, but could not advance another competitor in the main draw. Martinez and Pollanen, along with senioirs David Hough, Arnaud Restifo and Fabian Roensdorf, all recorded a first-round conquest before suffering a reversal of fortune in their ensuing matches.

Martinez came through with a 6-3, 6-3 decision over UC Riverside’s Gilbert Chung, while Pollanen survived a tough test against LMU’s Prost, 6-4, 7-6(4). In addition, Hough continued his strong play this fall with a 6-3, 6-1 triumph over Grand Canyon’s Laurent Magne, while Restifo pinned a 6-3, 6-4 defeat on Cal Poly’s Alexis Delisle. On the other hand, Roensdorf was the only one of the bunch to play three sets, overcoming an early deficit to dispose of LMU’s Cartier Juan, 4-6, 7-5, 7-5.

However, Martinez had his momentum derailed by USC's Bradley Frye in the round of 64, where he experienced a 6-2, 6-4 setback, while Pollanen was toppled by former Arizona teammate Alejandro Reguant by a 6-2, 6-1 tally. Similarly, Hough found himself on the wrong side of a 6-0, 6-4 score against Corrado Summaria of host Pepperdine, while Restifo was upended in identical fashion by another Waves adversary Enrique Luque Rico, 6-0, 6-4. The closest match of the group once again belonged to Roensdorf; however, the Dortmund, Germany, product ultimately succumbed to San Diego’s Sacchit Sharma, 6-4, 7-6(2).

SDSU witnessed limited success in its other main draw doubles matches, with Restifo and Roensdorf posting the Scarlet and Black’s other remaining victory after downing Grand Canyon’s Magne and David Weber, 8-5, in the round of 64. However, the Aztec pairing could not duplicate the result in round of 32, where they dropped an 8-4 decision to Pepperdine’s Luque Rico and Tim Zeitvogel.

SDSU’s two other tandems suffered 8-6 defeats in their round of 64 matches, with Hough and Scemanenco running out of steam against USC’s Brandon Holt and Ryan Smith, while Kirchhoff and Traxler were tripped up by USD’s David Norfeldt and Nico Borter.