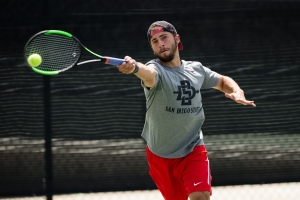 September 22, 2018 (San Diego) - The San Diego State men's tennis team opened its 2018 fall schedule on Friday with a combined six players competing in two tournaments at the Wildcat Invitational in Tucson, Ariz., and the Battle in the Bay Classic in San Francisco, Calif.

At the Wildcat Invite, where the singles brackets were named after Grand Slam professional tennis events, junior Nicholas Mitchell (Ojai, Calif.) emerged triumphant in the U.S. Open draw with a 6-3, 7-5 triumph in the first round over Yohann Prinsen of Mesa Community College. With his victory, the Ojai, Calif., native will square off against Sebastian Herrera of New Mexico State in the semifinals on Saturday at approximately 11:30 a.m.

Earlier, Mitchell joined forces with fellow classmate Arnaud Restifo to post a 6-2 conquest of Northern Arizona’s Ron Idzon and Chris Steele in the quarterfinals of the Wilma Wildcat doubles draw. Consequently, the SDSU tandem punched their ticket to Saturday’s semifinal against the Boise State duo of Ryland McDermott and Simon Arca Costas, slated to get underway no earlier than 8:30 a.m.

In the other doubles bracket, the Wilber Wildcat draw, junior Rafael Gonzalez Almazan and sophomore Jan Kirchhoff experienced the opposite fate, suffering a narrow setback to the New Mexico State’s Martin Simecek and Luis Flores in a tiebreaker, 7-6(5). As a result, the Aztec pairing will battle Brigham Young’s David Ball and Vinicius Nogueira in consolation action on Saturday, starting at 8 a.m.

Gonzalez Almazan and Kirchhoff split their two respective singles matches on Friday. In the French Open draw, Gonzalez Almazan outlasted BYU’s Ball in a three-set affair, 3-6, 7-5, 6-4, before running out of steam in a 7-5, 6-3 defeat at the hands of New Mexico State’s Enrique Asmar in the quarterfinals.

In the Australian Open draw, Kirchhoff also rallied for a three-set victory over Tom Fisher of Northern Arizona, 1-6, 6-2, 6-1, but was unable to duplicate the feat in the quarterfinals against Mathieu Rajaonah, suffering a 6-4, 6-2 setback.

Restifo, meanwhile, came up empty in his two singles matches on Friday in the Australian Open draw, falling in three sets to Stijn De Haan of New Mexico State in the first round, 6-3, 3-6, 6-3, before experiencing a 6-4, 6-4 defeat to New Mexico’s Stepan Holis on the consolation side of the bracket. He will now play Ruben Montano of Northern Arizona in the North Compass draw consolation final on Saturday at 10 a.m. at Ventana Canyon Golf and Racquet Club.

San Diego State is also represented this weekend by senior Sander Gjoels-Andersen and sophomore Ignacio Martinez at the Battle in the Bay Classic in San Francisco, Calif.

In first-round singles action, Gjoels-Andersen gave Stanford’s William Genesen all he could handle in the opening set, falling in a tiebreaker, 7-6(5), before his Cardinal adversary turned on the afterburners in the second by a 6-1 margin. Meanwhile, Martinez found himself on the wrong side of a 6-2, 6-2 decision against Wake Forest’s Bar Botzer.

Gjoels-Andersen and Martinez will join forces in doubles on Saturday to battle the Wake Forest tandem of Alan Gadjiev and Morgan Dill, starting at 8:30 a.m.

In consolation singles competition slated for Saturday, Gjoels-Andersen will face Sander Jong of TCU, while Martinez will engage Texas Tech’s Jackson Cobb. Both matches are scheduled to get underway by 8:30 a.m. at California Tennis Club.