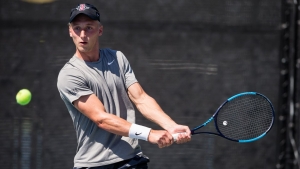 Aztec senior David Hough victorious in both doubles and singles

In the Flight A consolation doubles final, the Aztec duo of Aaro Pollanen (Helsinki, Finland) and Ignacio Martinez (Weston, Fla.) left no doubt in their encounter with UCLA’s Max Wild and Bryce Pereira, finishing with an 8-1 conquest.

Additionally, Hough continued his impressive fall in singles play with a 6-4, 6-2 victory over Dominguez Soto in the third-place match of Flight B.

However, Martinez was not as fortunate in his duel with the Gauchos’ Will Saiga in the 11th-place match in the same flight, dropping a straight-set decision, 6-0, 7-5.

In the third-place match of Flight C, Gonzalez Almazan found himself in a heated battle with UCLA’s Blaine Hovenier, but ultimately fell short in a super-tiebreaker, 6-7(5), 7-6(3), 10-6.

San Diego State resumes its fall schedule next weekend when it competes in the ITA Southwest Regional Championships Oct. 17-20 on the campus of Pepperdine University in Malibu, California.