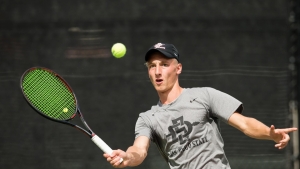 In the Black Flight main draw, the duo of juniors David Hough (Traralgon, Australia) and Nicholas Mitchell (Ojai, Calif.) knocked off Southern Utah’s Remus Cope and Keonho Shin in the quarterfinals by a 6-2 tally, but were unable to clinch a spot in the championship final after suffering a 6-3 defeat at the hands of UC Irvine’s Daniel Gealer and Brian Man-Son-Hing in their semifinal encounter.

Likewise in the consolation semifinals of the Red Flight, the pairing of juniors Rafael Gonzalez Almazan (Madrid, Spain) and Nicholas Mitchell (Ojai, Calif.) emerged with a 6-2 victory over UC San Diego’s Sreeganesh Manoharan and Marc Isaia, but could not duplicate the result in the title match, falling to Pacific’s Tadiwa Chinamo and Akram El Sallaly by a 6-3 count.

SDSU saw light action in consolation singles competition, as Hough exacted a small measure of revenge against Man-Song-Hing with a 6-2, 6-2 triumph, while de la Torre dispatched Cope in straight sets as well, 6-1, 7-5.

The Aztec Fall Invitational wraps up on Sunday with championship and consolation matches in both doubles and singles competition, beginning at 9 a.m. Admission is free to the public.