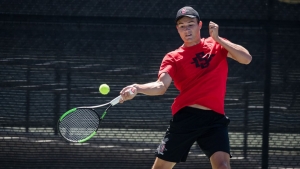 The Aztecs, however, were unable to advance in the main draw of either bracket, posting just one victory in consolation singles play.

In the doubles round of 16, the SDSU tandem of juniors Ignacio Martinez and Aaro Pollanen were eliminated after suffering an 8-3 setback at the hands of Loyola Marymount’s Max Kaiser and Ryan Brown.

Meanwhile in singles competition, junior Jan Kirchhoff was ousted from the main draw as well after falling short against Cal Poly’s Antoine Noel, 6-4, 6-2, in the round of 16.

Over in the back draw, Alex Scemanenco split his two matches, outlasting UC Riverside’s Gilbert Chung in a super-tiebreaker, 3-6, 6-4, 10-6, before running out of steam against LMU’s Ethan Prost, who dealt the Aztec sophomore a 6-2, 6-0 defeat.

Doubles – Main Draw Round of 16

Singles – Main Draw Round of 32

Singles – Consolation Draw – Round of 32

Singles – Consolation Draw – Round of 16