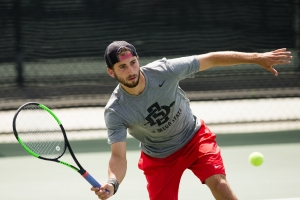 September 23, 2018 (San Diego) - The San Diego State men's tennis team continued its busy weekend schedule at two separate tournaments on Saturday with its roster split between the Wildcat Invitational in Tucson, Ariz., and the Battle in the Bay Classic in San Francisco, Calif.

At the Wildcat Invite, where the singles brackets were named after Grand Slam professional tennis events, Nicholas Mitchell clinched a spot in the championship final of the U.S. Open draw with a come-from-behind victory over New Mexico State’s Sebastian Herrera in three sets, 4-6, 6-4, 6-4.

With his result, the Aztec junior will square off against Lucas Severo of Mesa Community College for the bracket title on Sunday, starting no earlier than 9:30 a.m. Severo was a winner in the other semifinal match with a straight-set triumph over Peter Hariri of Ottawa University (Ariz.), 6-1, 7-6(7)

In doubles competition, where the brackets earned the monikers of host Arizona’s two mascots, Gonzalez Almazan and Kirchhoff split two encounters on the consolation side of the Wilber Wildcat draw, posting a 6-3 conquest of Brighan Young’s David Ball and Vinicius Nogueira, before falling in a tiebreaker to Jack Heslin and Simon Stenlund of Boise State in the semifinals, 7-6(5).

In the semifinals of Wilma Wildcat draw, the Aztec pairing of Restifo and Mitchell had their title hopes cut short with a narrow 7-5 setback to another Boise State duo in Ryland McDermott and Simon Arca Costas.

San Diego State came up empty in three matches at the University of San Francisco’s Battle in the Bay on Saturday. The doubles tandem of senior Sander Gjoels-Andersen and sophomore Ignacio Martinez fell victim to the Wake Forest duo of Alan Gadjiev and Morgan Dill by an 8-5 count in the round of 16.

Similarly, Martinez and Gjoels-Andersen were unable to rebound in the round of 16 singles consolation. Martinez was ousted by Jackson Cobb of Texas Tech, 6-1, 7-5, while Gjoels-Andersen was toppled by Sander Jong of TCU in a super-tiebreaker, 2-6, 6-1, 1-0(3).