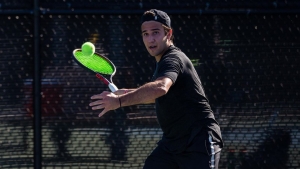 Aztecs come up empty in singles after winning doubles point

With the loss, SDSU suffered its third straight defeat, slipping to 3-9 overall and 0-2 in MW competition, while the Aggies improve to 10-4 on the season after winning their conference opener.

Things looked good for the Scarlet and Black when the tandem of Ignacio Martinez and Judson Blair recorded a 6-2 conquest of USU’s Sergiu Bucur and Souf El Mesbahi in the No. 2 doubles position, while the duo of Johannes Seeman and Victor Castro won their fourth straight with a 6-4 triumph over Felipe Acosta and Javier Ruiz at the No. 1 spot, giving the visitors a 1-0 lead.

With the doubles outcome no longer in doubt, the pairing of Rafael Gonzalez Almazan and Aaro Pollanen had their match abandoned in the third slot after grabbing a 5-4 lead over Jack Ninteman and Roko Savin.

However, the Aztecs experienced a reversal of fortune in the singles round, where USU emerged victorious in all four completed matches to pull away for the win.

The Aggies dented the scoreboard when Savin dispatched Gonzalez Almazan on the No. 4 court by a 6-4, 6-2 count, while Castro was dispatched by El Mesbahi in similar fashion at No. 2 6-3, 6-2.

The remaining four remaining encounters were extended to three sets, as SDSU battled to regain some momentum. Roni Rikkonen fought back in the second set in his match with Ruiz in the No. 5 position, but ran out of steam in the third, falling 6-1, 3-6, 6-4.

Over on the second court, Martinez started strong in his clash with Acosta but was unable maintain the same intensity as his USU adversary, who came back to win 4-6, 6-2, 6-0, providing the host school with the requisite fourth point for a team victory.

Two matches were suspended at this juncture. Blair found himself trailing 5-4 in the third set vs. Keanu Rigby after splitting the first two 3-6, 6-3.

Seeman, who earned a No. 123 ITA singles ranking earlier this week, was also engaged in a battle with Bucur at the top of the ladder, as the two players each captured a set via tiebreaker. Seeman prevailed in the first 7-6(5), before dropping the second 6-7(3). Bucur then jumped to a 1-0 lead in the third set when play was halted.

San Diego State returns to the road next weekend for a pair of Mountain West matches at Air Force (April 9) and New Mexico (April 11).