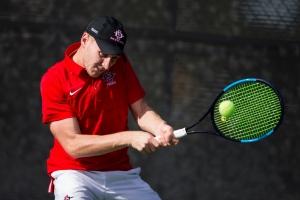 SDSU captured its first doubles point of the year before winning five of six singles encounter to improve to 2-1 on the young season while spoiling the Tritons’ (0-1) spring opener.

The newly minted doubles team of Nicholas Mitchell and Gavin Spencer set the tone early with a 6-0 shutout of UCSD’s David Higgins and Sahm Irvine at the No. 3, but the duo of Sander Gjoels-Andersen and Rafael Gonzalez Almazan experienced a hiccup on the No. 1 court, falling to the Triton pairing of Zach Ermert and Sreeganesh Manoharan, 6-1.

Undaunted, the Aztecs ultimately prevailed, as the tandem of Jan Kirchhoff and Ignacio Martinez outlasted the combo of Marc Isaia and Neil Tengbumroong, 6-4, to give the host school a 1-0 lead it would not relinquish.

With momentum on its side, SDSU claimed the first three singles matches in relatively quick fashion to secure the requisite four points for the team victory. First off the court was Gjoels-Andersen, who moved to 3-0 this spring after overcoming his previous struggle in doubles with a 6-1, 6-1 conquest of Ermert in the third position.

Martinez soon followed with a straight-set decision of his own in the No. 2 spot, where he pinned a 6-3, 6-2 defeat on Irvine, while Gonzalez Almazan promptly disposed of Manoharan by a 6-4, 6-2 count at No. 6.

With the outcome no longer in doubt, the Tritons avoided the whitewash, as Tengbumroong upended Restifo, 6-3, 6-3, on court No. 4.

However, the Aztecs finished strong in the two remaining matches, emerging victorious in a pair of tight battles at No. 1 and No. 5, respectively. Fabian Roensdorf rallied from an early deficit to outlast Isaia in three sets, 3-6, 6-3, 7-5, while Kirchhoff survived a marathon engagement as well, edging Richard Han, 7-6(12), 7-5.

“We did a good job of overcoming some adversity in a few spots today, especially at No. 1 and No. 5,” said SDSU head coach Gene Carswell. “But overall it was another step in the right direction as we move forward in the season. Winning the doubles point is always a good way to start a match in general, but it was really nice to see Nick Mitchell and Gavin Spencer come out and get that win at No. 3 in convincing fashion.”

San Diego State will be back in action on Friday, Feb. 8 when it plays host to No. 19 Alabama at Aztec Tennis Center. Match time is set for 3 p.m.