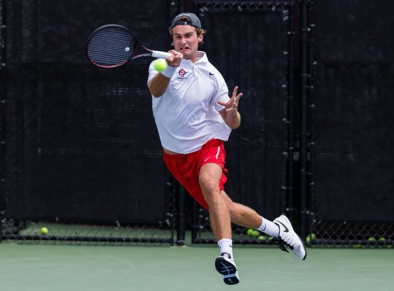 April 20, 2019 (San Diego) - San Diego State wrapped up its regular-season schedule on a high note Saturday with a 4-0 triumph over UNLV in Mountain West dual match at Aztec Tennis Center.

With the victory, the Aztecs recorded their 10th win in the last 11 meetings vs. the Rebels, improving to 13-9 on the year and 4-3 in conference play. In addition, SDSU completed its fourth shutout of the spring and third against league opponents, while UNLV dropped its fourth in a row, falling to 13-8 overall and 2-5 in the MW.

The Aztecs captured the seventh doubles point in their last nine outings after the tandem of Rafael Gonzalez Almazan and Jan Kirchhoff provided the clinching decision with a 6-2 conquest of Jordan Sauer and Olle Thestrup on the No. 2 court. Just moments earlier, Arnaud Restifo and Fabian Roensdorf won their fourth straight with a 6-1 pasting of Tom Ciszewski and Milos Dabic (UNLV) in the No. 3 spot.

With a 1-0 lead safely tucked away, the No. 1 match pitting SDSU’s Sander Gjoels-Andersen and Ignacio Martinez against Clayton Alenik and Eric Samuelsson was abandoned with the Aztec duo holding a 4-3 advantage.

Gjoels-Andersen also squared off against Samuelsson at the top of the ladder in singles, earning his team-leading 12th dual victory after his Rebel adversary retired facing a formidable 6-3, 3-0 deficit.

Moments later, Gonzalez notched win No. 12 of the spring as well after knocking off Tom Ciszewski, 6-4, 6-0, in the sixth slot.

Over on the fourth court, it was Martinez who soon took care of the securing the requisite fourth team point with a 6-4, 6-4 triumph over Dabic.

Three remaining matches were left unfinished at this juncture, with Kirchhoff holding a 4-1 lead in the second set of his encounter with Thestrup after dropping a tiebreaker 7-6(5) at No. 2. In addition, Restifo found himself knotted with Alenik 5-5 in set two after winning the opener 6-4 in the fifth slot, while Roensdorf was looking down the barrel of a 5-1 deficit in the third set vs. Sauer after splitting the first two 6-3, 1-6.

Between doubles and singles, the Aztecs held a special ceremony to honor Gjoels-Andersen, their lone senior.

San Diego State will have its sights set on a conference title next week when it travels to the Central Valley for the MW Championship, April 25-27, in Fresno, Calif. The Aztecs are seeded fourth in the eight-team tournament, with brackets revealed in the coming days.