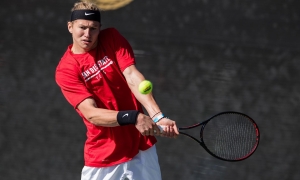 Seeman/Castro tandem victorious at No. 1 doubles for Aztecs

May 1, 2021 (San Diego) - The visiting San Diego State men’s tennis team fell to the University of San Diego 4-2 in its 2021 spring finale on Saturday at Skip and Cindy Hogan Tennis Center.

With the loss, the Aztecs dropped their third straight meeting against the Toreros, finishing the year with a 5-15 record in dual-match competition, while USD ends its season at 9-10.

SDSU’s lone victory of the day was secured by the all-Mountain West tandem of Johannes Seeman and Victor Castro, who completed the year with a 9-4 record after posting a 6-3 conquest of August Holmgren and Nico Borter on the No. 1 court.

Conversely, the Aztec pairing of Ignacio Martinez and Judson Blair was not as fortunate, as their Torero adversaries Marvin Schaber and David Norfeldt claimed a 6-2 decision in the No. 2 spot.

However, San Diego State earned the doubles point when short-handed USD was unable to provide a duo to face the Aztecs’ Rafael Gonzalez Almazan and Aaro Pollanen in the No. 3 position.

The Aztecs’ Blair also won by forfeit at No. 6 singles; however, SDSU could not build on its 2-1 advantage, as the Toreros posted four victories in the round to clinch the victory.

First off the court was Martinez, who was toppled by Norfeldt in the third spot 6-1, 6-2, while Seeman experienced a nearly identical fate at the top of the ladder against Holmgren, who entered the weekend as the 77th-ranked singles player in the latest Oracle/ITA poll.

After Seeman was dealt a 6-2, 6-1 defeat, Gonzalez Almazan was upended by Garrett Kurtz in the No. 4 spot, 6-2, 6-2. Moments later, Roni Rikkonen fell victim to Schaber on the No. 5 court 6-1, 6-3, giving USD the requisite fourth point for the team triumph.

With Saturday’s outcome no longer in question, Castro’s clash with Borter in the No. 2 position was abandoned after his Torero counterpart captured the first set 6-3 and held a 5-4 lead in the second.

San Diego State finished sixth in the Mountain West standings during the 2021 season with a 2-6 mark in conference play. The Aztecs defeated UNLV at home 4-3 in their final league match at home on April 24.