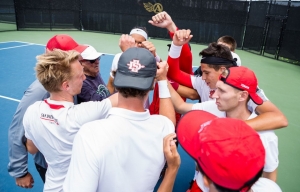 September 22, 2019 (Tucson) -  San Diego State’s Jules Auffray and Daniel Traxler captured their doubles flight championship on Saturday to highlight the second day of action for the Aztec men’s tennis team at the Wildcat Invitational, hosted by the University of Arizona at Ventana Canyon Golf and Racquet Club.

In the semifinals of the Wilma Wildcat flight, Auffray and Traxler emerged victorious over the Northern Colorado pairing of Thomas Pudney and Julian Kenzler, 6-1, before knocking off Northern Arizona’s David Nguyen and Mikael Purne by a 6-4 count for the crown.

Later in singles play, Traxler advanced to the consolation championship of the Australian Open flight with a straight-set decision over another NAU adversary in Chris Steele, 6-3, 7-5. With his result, the SDSU freshman will square off against New Mexico’s Jake Tronsdon for the title on Sunday.

Over in the Wimbledon flight, Auffray came through with a 6-3, 6-3 triumph over Northern Arizona’s Daniel Dillon in a compass draw matchup.

However, the remainder of the Aztec delegation was not as fortunate, with the tandem of Fabian Roensdorf and Alex Scemanenco falling to New Mexico State’s Louis Menard and Jordy Visser, 6-2, in the semifinals of the Wilber Wildcat doubles flight.

Roensdorf was also dealt a 6-4, 6-2 defeat by another Aggie opponent Martin Simicek in a compass draw match of the Australian Open flight, while Scemanenco experienced a narrow setback to Grand Canyon’s Jakub Novak in back-to-back tiebreakers, 7-6(3), 7-6(3).

The Wildcat Invitational concludes on Sunday with the action getting underway at 8 a.m. MST/PDT.