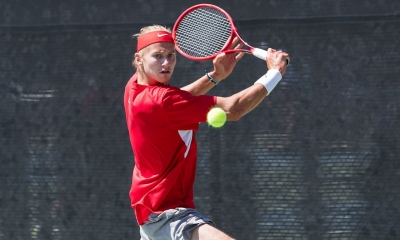 October 5, 2021 (Tulsa) - The San Diego State men’s tennis delegation wrapped up play on Tuesday at the ITA All-American Championships, where Johannes Seeman was eliminated in the consolation draw of the qualifying singles round at Michael D. Case Tennis Center.

Seeman squared off against Adham Gaber of host school Tulsa, but was unable to advance in the bracket, falling in straight sets by a 7-5, 6-0 tally.

The Aztec sophomore earned a spot in the qualifying round but dropped a narrow three-set decision in the main draw on Monday to Presbyterian College’s Nicholas McKinney 6-2, 6-7(6), 7-6(3).

SDSU had three players compete in the pre-qualifying rounds held Oct. 2-3. Senior Joe Tyler and freshman Alexander Mändma each posted a victory in the round of 256 on Saturday, but both were defeated in their ensuing matches. In addition, junior Victor Castro was upended in his initial main draw singles encounter before falling short in consolation play.

San Diego State returns to action Oct. 15-17 when it plays host to the SDSU Fall Invitational at Aztec Tennis Center.