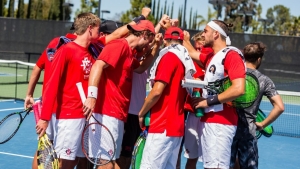 April 27, 2019 (Fresno) - Fourth-seeded San Diego State fell short in its quest for its first conference tournament title since 2005 on Saturday, dropping a 4-2 decision to third-seeded Fresno State in the finals of the 2019 Mountain West Championship at Spalding G. Wathen Tennis Center.

The Aztecs, who entered the day having won seven of their last nine dual matches, were unable to maintain the momentum despite capturing the doubles point. As a result, SDSU finishes the season with a 15-10 overall record, while the Bulldogs (18-10) secure the league’s automatic berth in next month’s NCAA Tournament.

The Aztecs broke out of the gates quickly, claiming the doubles point for the 11th time in their last 13 outings. The all-MW tandem of Sander Gjoels-Andersen and Ignacio Martinez set the tone at the top of the rotation with a solid 6-3 triumph over Zdenek Derkas and Patrik Pech for their team-leading ninth victory of the spring.

Moments later, the duo of Rafael Gonzalez Almazan and Jan Kirchhoff won their third in a row after outlasting Mantas Bugailiskis and Cem Erturk by a 6-4 count in the second position.

With a 1-0 lead safely in tow, the match on court three was abandoned with Arnaud Restifo and Fabian Roensdorf holding a 6-5 lead over Angus Bradshaw and Cagatay Soke.

SDSU could not parlay its good fortune into singles success, however, winning just one completed match in the round.

Fresh off his dramatic victory in Friday’s semifinal vs. New Mexico, Kirchhoff kept the hot hand in his encounter with Bugailiskis in the No. 2 spot, posting a dominating 6-0, 6-0 conquest to give the Aztecs a 2-0 edge in the team score.

Much to the chagrin of the Scarlet and Black, though, Fresno State responded with four consecutive victories to emerge with the crown on their home courts.

Shortly thereafter, Soke put the host school in front for good, pinning a 6-1, 7-5 defeat on Gonzalez Almazan at No. 6.

Over on court five, Roensdorf captured the first set in convincing fashion vs. Bradshaw, 6-0, but could not sustain the intensity as his adversary rallied to take the final two sets, 6-4, 6-2, giving Fresno State the championship.

The No. 1 match remained unfinished, as Gjoels-Andersen owned a 5-1 lead over Derkas in the second set at after winning the first, 7-5.