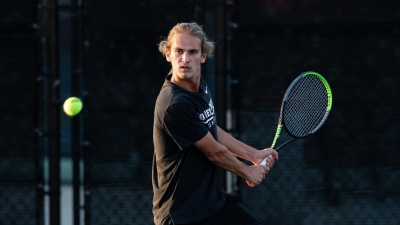 With the setback, the Aztecs suffered their fourth straight defeat, dropping to 2-4 overall, while the Mustangs won their fourth in a row, improving to 5-1 on the season.

SDSU found itself trailing 2-0 after yielding a hotly contested doubles point as well as the first singles match, where Joe Tyler saw his personal four-match winning streak halted in a 6-0, 6-3 loss to Noah Berry at the top of the ladder.

The Aztecs dented the scoreboard moments later when Victor Castro dispatched Fernando Fonseca in straight sets in the No. 3 slot 6-3, 6-2. However, Cal Poly kept the visitors at bay after Gary Vardanyan pinned a 6-4, 6-2 defeat on Judson Blair in the No. 6 position, giving the host school a 3-1 advantage. Nevertheless, Blair typified SDSU’s mettle on this day, nearly overcoming a 5-0 deficit in the first set before running out of steam.

Likewise, Roni Rikkonen weathered some early adversity of his own to record his first victory of the spring with a three-set triumph over Hendrik Inno in the fifth spot,\ 1-6, 6-3, 6-4. After stumbling in the first set, the Aztec sophomore maintained his composure, helping the Scarlet and Black trim the deficit to 3-2 on the team scoreboard.

Over on the No. 2 court, Johannes Seeman found himself in a tight battle with Joe Leather, as SDSU fought to stay alive. The Aztec sophomore regrouped to capture the second set 6-3 after falling in the opener by an identical. Seeman later overcame a 5-4 deficit in the third set to force a tiebreaker, but Leather prevailed 7-6(2) to claim the requisite fourth point and secure Cal Poly’s victory.

With Sunday’s outcome no longer in doubt, the No. 4 singles match pitting SDSU’s Jules Auffray and Colter Smith was abandoned in a second-set tiebreaker with the scored knotted at 6-6. Previously, Smith captured a 7-6 tiebreaker in the first set.

Earlier in doubles, the Aztecs found themselves on the wrong side of the scoreboard in two completed matches. SDSU’s No. 1 tandem of Castro and Tyler was dealt a 6-4 setback by Inno and Leather, while Auffray and Seeman were edged by Berry and Fonseca in the No. 3 position.

With Cal Poly having clinched the doubles point, the No. 2 match was suspended, as the Aztecs’ Blair and Alexander Mandma found themselves in a 5-5 deadlock with Smith and Bastiaan Weststrate. Mandma endured a sore foot in the encounter and was later scratched in singles.

San Diego State will have nearly two weeks to prepare for a home doubleheader on Saturday, Feb. 26 when it plays host to Gonzaga and Pomona-Pitzer at Aztec Tennis Center.