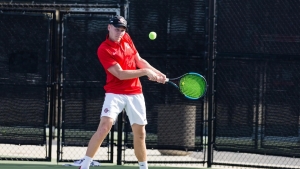 Aztecs slip to 2-2 on the year

February 8, 2019 (San Diego) - San Diego State played well in spots against No. 23 Alabama at home on Friday but could not keep pace in the end, dropping a 5-2 decision in a non-conference dual match at Aztec Tennis Center.

After falling short in a closely contested doubles point, the Aztecs were unable to rebound in singles play as the visiting Crimson Tide took four of six encounters to seal the victory.

With the loss, SDSU slips to 2-2 on the year, while Alabama moves to 7-1 overall.

The Aztec duo of Sander Gjoels-Andersen and Rafael Gonzalez Almazan opened the doubles round in strong fashion, by winning their second straight match with a 6-3 conquest of Patrick Kaukovalta and Mazen Osama on the No. 1 court.

However, the host school’s optimism was quickly jolted when the tandem of Jan Kirchhoff and Ignacio Martinez suffered a 6-4 setback to Thibault Cancel and Alexey Nesterov in the No. 2 position, while the newly minted pairing of Nicholas Mitchell and Fabian Roensdorf experienced a narrow loss of their own to Edson Ortiz and Zhe Zhou by a 7-5 count in the No. 3 position.

Stung, the Scarlet and Black found itself on the wrong side of the scoreboard in the first four completed singles matches, allowing the Crimson Tide to record the win. First off the court was Gjoels-Andersen, who dropped his first match of the spring by 6-1, 6-4 tally to Ortiz in the No. 2 slot, while Arnaud Restifo was toppled by Zhou, 6-3, 6-1, in the fourth position.

Over on the No. 1 court, Roensdorf had his hands full against Osama, who entered the weekend with a No. 40 individual national ranking. However, the Aztec transfer was fell victim to his Crimson Tide adversary in a 6-4, 6-4 defeat.

With the outcome of the dual no longer in doubt, the next two matches were decided by super-tiebreakers. Martinez let an early lead slip away against Cancel in the No. 3 spot, ultimately falling by a count of 6-7(5), 6-2, 10-8.

Trailing 5-0, SDSU finally dented the scoreboard after Kirchhoff outlasted Nesterov in the fifth position, 4-6, 7-6(5), 10-3, while Gonzalez Almazan accounted for the Aztecs’ other point after prevailing in a lengthy straight-set affair over Jeremy Gschwendtner at No. 6, 6-4, 7-6(5).

San Diego State wraps its weekend slate on Sunday, Feb. 10 when it battles Northern Arizona at Aztec Tennis Center, starting at noon. Log on to GoAztecs.com for any weather-related schedule changes.