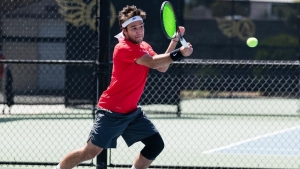 With the result, the Aztecs suffered their fifth straight defeat in the all-time series vs. the Gauchos, slipping to 5-14 on the year, while UCSB raises its record to 7-5 overall.

For the seventh time in its last 11 outings, SDSU captured the early doubles point but dropped to 2-5 in those matches.

The Aztecs swept all three matches in the round on Wednesday, with the tandem of Johannes Seeman and Victor Castro improving to 8-4 on the year after dispatching Stefano Tsorotiotis and Alejandro Vedri by a 6-3 tally on the No. 1 court.

Moments later, the duo of Ignacio Martinez and Judson Blair dealt Victor Krustev and Joseph Rotheram an identical 6-3 defeat in the second position, while Rafael Gonzalez Almazan and Aaro Pollanen edged Joseph Guillin and Kai Brady in the third spot 7-5 to complete the doubles sweep.

The Gauchos stormed back with three straight victories in singles, where four matches were extended to three sets, while another was decided via super-tiebreaker.

First off the court was Seeman, whose match in the No. 1 spot was the only encounter completed in straight sets, as Guillin prevailed by a 7-5, 6-4 count.

Shortly thereafter Gonzalez Almazan captured the first set in his battle at No. 4 but was unable to hold off a hard-charging Pablo Masjuan, who emerged triumphant 5-7, 6-1, 6-3.

Over on the No. 6 court, Blair overcame a 6-0 blanking in the first set against Brady by winning a marathon tiebreaker in the second, 7-6(8). However, the Aztec freshman ran out of steam in the third and came up empty once again 6-0.

Trailing 3-1, SDSU stemmed the tide momentarily, as Castro became the Scarlet and Black’s only double winner of the day after pulling away from Tsorotiotis in the No. 2 position 6-7(5), 6-4, 6-1.

Seeing his first action in six matches, Roni Rikkonen showed no signs of rust in his encounter with Rotheram at No. 5. The Aztec freshman split the first two sets 6-2, 3-6 before finding himself in a tight battle in the third, where his Gaucho adversary survived a narrow tiebreaker 7-6(5), clinching the team victory for the visitors.

With the match’s outcome no longer in question, the clash on the No. 3 court was completed in a super-tiebreaker, as Krustev outlasted Martinez 7-5, 4-6, 10-8.

San Diego State closes out its 2021 campaign on Saturday when it makes the short drive westbound on Interstate 8 for a crosstown battle at the University of San Diego starting at 12:30 p.m.