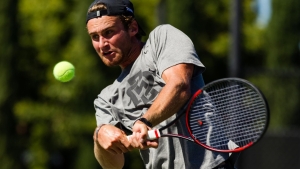 SDSU stormed out of the gates quickly as the doubles team of Jan Kirchhoff and Ignacio Martinez cruised to a 6-0 shutout over the Gaucho tandem of Victor Krustev and Joseph Rotheram in the No. 2 position. However, UCSB subsequently stole the Aztecs’ thunder by winning the next two encounters to capture the early doubles point.

In the No. 3 spot, the Gaucho pairing of Joseph Guillin and Alex Dominguez Soto dispatched SDSU’s newly minted combo of Arnaud Restifo and Fabian Roensdorf by a 6-4 count, while the duo of Nicolas Moreno de Alboran and Anders Holm pinned a 6-3 defeat on the Aztecs’ Sander Gjoels-Andersen and Rafael Gonzalez Almazan at the top of the rotation.

Trailing 1-0, San Diego State lost further ground after ceding the first two singles matches. First off the court was Restifo, who experienced a 6-0, 6-3 setback to Krustev in the No. 3 slot, while Martinez fell victim to 22nd-ranked Guillin in the second position by a 6-3, 6-4 tally.

Shortly thereafter, the Aztecs finally dented the scoreboard when Gjoels-Andersen dismissed Rotheram at No. 4, 6-3, 6-4.

Over on the No. 1 court, Roensdorf drew the unenviable task of facing Moreno de Alboran in his first singles start for the Scarlet and Black, as his UCSB adversary entered the spring with a No. 6 ITA ranking. The SDSU transfer kept things close in the two-set affair, but could not force a third before ultimately succumbing by a 6-4, 7-6(4) margin, which gave the Gauchos the requisite fourth point for victory.

With the outcome no longer in question, the teams split the final two matches of the afternoon in three-set fashion. In the fifth spot, Kirchhoff held a late lead in the third set against Hironori Koyangi, but ran out of steam, 3-6, 6-2, 7-6(5), while Gonzalez Almazan outlasted Dominguez Soto in a marathon battle at No. 6, 7-6(2), 3-6, 7-6(9).

San Diego State continues its season-opening six-match homestand next weekend when it plays host to UC Irvine on Saturday, Jan. 26 at Aztec Tennis Center. First serve is set for noon.