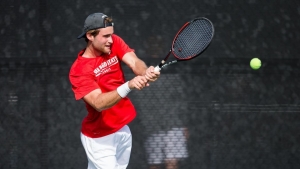 With the loss, the Aztecs slip to 5-5 overall, while the Toreros move to 11-3 on the season.

The two teams fought through a hotly contested doubles point, but the Scarlet and Black was unable to gain the upper hand.

On court No. 3, the SDSU duo of Fabian Roensdorf and Gavin Spencer dropped a 6-3 decision to USD’s 59th-ranked tandem of Joel Gamerov and August Holmgren, while the pairing of Sander Gjoels-Andersen and Rafael Gonzalez Almazan suffered a narrow 7-5 setback to Nico Borter and Gui Osorio in the No. 1 spot.

Meanwhile in the No. 2 position, Jan Kirchhoff and Ignacio Martinez maintained a slim 6-5 lead over Guus Koevermans and David Norfeldt, but with the doubles outcome no longer in question, the match was abandoned.

First off the court was Roensdorf, who was tasked with facing another ranked opponent in No. 70 Osorio in the No. 2 slot, where he was dealt a 6-3, 6-1 defeat.

Over on the No. 3 court, Martinez battled Borter in a tight second set, but ultimately dropped a 6-3, 7-5 decision, while Arnaud Restifo fell victim to Norfeldt in the third position shortly thereafter, 6-3, 6-3.

The three remaining encounters were suspended when USD tallied the clinching fourth point, including Gjoels-Andersen, who split his two sets with Holmgren, capturing the first 6-3, before ceding the second 2-6.

In addition, Kirchhoff was knotted at 5-5 in the second set of his match vs. Gamerov at No. 4, after stumbling in the first, 1-6.

Elsewhere, Gonzalez Almazan claimed the first set in a tiebreaker vs. Koevermans, 7-6(3) in the fifth slot, but trailed 1-2 in the second.

San Diego State will play three home matches next week in the annual San Diego Spring Classic March 22-24 at Aztec Tennis Center. Dates, opponents and times will be determined in the coming days.